Springtime For Henry (and Barbara) 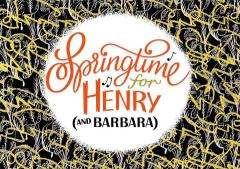 Sir Henry Moore straddled the globe like a mighty colossus of Modernism, hoisting the flag for a thrilling new muscular breed of British sculpture, to the universal and enduring rapture of critics and public alike.

Barbara Hepworth went to college with him.

For two nights only, (before the inevitable Broadway transfer), a stellar cast brings this extraordinary story to life in a multitude of unexpected ways. See our durable hero Henry throw off the shackles of his humble Yorkshire roots to conquer the world. Meet our plucky heroine Barbara, languishing in his long shadow – just a little woman chipping away at an impossible dream... to stand on the shoulders of giants and carve out a niche of her own.