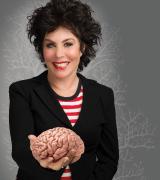 Ruby Wax is a much loved US born comedian, actor and writer based in the UK. Starting out as an actor at the RSC, she went on to write and perform in her own television shows and script edited the entire series of Absolutely Fabulous. More recently she has also become a mental health campaigner and gained a Masters degree in Mindfulness-based Cognitive Therapy from Oxford University.

Ruby Wax: Sane New World will help us understand why we sabotage our own sanity and provides a manual on how to survive the 21st century, using Ruby’s knowledge from her recent Masters Degree in mindfulness-based cognitive therapy at Oxford University, spiked with her trademark comedy.

Using her signature humour, Ruby gives a tour of the brain and how to tame it:

“We know so much about how the world works - but so little about our how our own minds work. It’s like having a Ferrari on top of your head but no one gave you the keys. We are not equipped for this century, it’s too hard, too fast, and too full of fear; we just don’t have the bandwidth. Our brains can’t take so much information in a world where we’re bombarded by bad news and force-fed information. I can just about take in the weather then I’m exhausted. You open a newspaper, everyone’s dead. We’re only supposed to know what our neighbour is up to; if the woman next door to you is having sex with the man next door to her we need to know; but four doors down and it’s none of our business.”