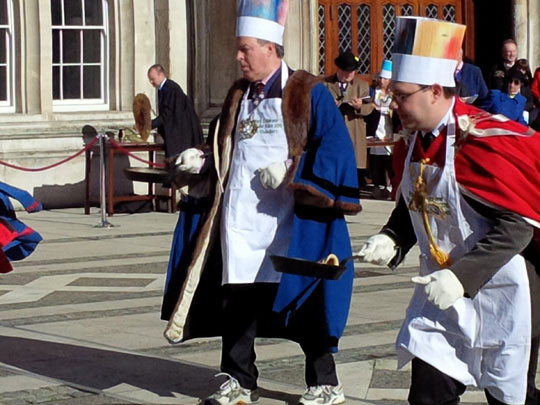 In 2004 The Worshipful Company of Poulters inaugurated the City’s inter-livery pancake race. The original participants were Livery companies in some way associated with the making of pancakes with invited teams from the Mansion House and Guildhall. This event now takes place each year in Guildhall yard at midday on Shrove Tuesday by kind permission of the Chief Commoner.

It is a colourful event which includes competitors running in their regalia and/or fancy dress. Each team consists of four competitors who compete for the Trophy – frying pans are awarded to the winner of each class final. Our Master will be leading our Clockmaker team.

Traditionally the Gunmakers start each heat with a bang, the Clerk to the Clockmakers is responsible for the accuracy of the timing, the Fruiterers provide lemons, the Cutlers plastic forks, the Glovers white gloves worn by each runner, and the Poulters the eggs essential in the making of the pancakes. A recent welcome additional attraction has been a specially commissioned piece sung by the Musicians Company.

Such is the appeal of the event that it has been widened to include Livery Companies and Corporation Departments such as The Old Bailey, preferably with a relationship (however specious) to the making of pancakes. Any surplus funds from the event and pancake sales are donated by the joint organisers, the Poulters’ Company and ‘The Cook and The Butler’, to the Lord Mayor‘s Charity.