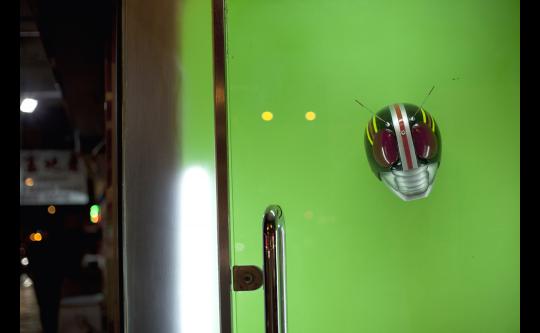 A solo exhibition of Hong-Kong based artist Nadim Abbas. For ‘Camoufleur’, Abbas will produce a new site-specific installation using camouflage and the gallery’s panoramic positioning on the public square, exploring how urban environments can influence and encourage our assimilation to the spaces we inhabit.

Abbas is interested in how urban living conditions have produced specific social trends and subcultures. For this body of work, Abbas draws on the figure of the ‘Otaku’ or ‘Hikikomori’, both terms that originate in Japan and describe stereotypes of socially ill-equipped, middle-aged males who isolate themselves in a world of manga and anime consumption. A notable trend in Otaku culture is the fetishisation of the military, which manifests in the prevalence of violent video games and the collection of wartime memorabilia. Abbas’ concern is with the spaces that allow for the formation of these figures. It is as if the proliferation of cramped interior spaces in modern cities inspires this mental retreat.

‘Camoufleur’ touches on the unlikely correlation between domesticity and warfare. The term ‘camoufleur’ refers to the artists, zoologists and naturalists who were employed to design and implement military camouflage during World War I and II. The exhibition at VITRINE will revolve around a wallpaper pattern, a point of reference for everything that is subsequently placed in the space, straddling connotations of the domestic – wallpaper is commonly employed in interior design – and militarized as a backdrop against which to conceal, and be concealed.

Throughout the duration of the show, Abbas will work with a performer who will inhabit the space, mimicking its surroundings like a stick insect camouflaged by the branch of a tree. The performer’s movements will demonstrate the emptying of gestures, employing a body language that does not attract attention. Their role will be both present and invisible, assimilated to the space to the extent that they are not discernible to those passing by.

The unique positioning of the vitrine, which is visible twenty-four hours a day, creates an interesting set of possibilities for this public display of domesticity. The exhibition space encourages repeat daily viewings and allows for varied and shifting encounters. Throughout the duration of the exhibition, Abbas will present new ways to inhabit the space through alterations in display and content. The roles of the performer and the backdrop will fluctuate and overlap over time, subtly influencing our perception of the co-dependent relationship between the two: the performer as an extension of the space, and the space as an extension of the performer.