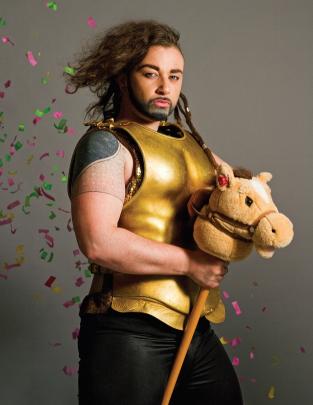 For their spring season 2017, Ovalhouse have returned to their roots of home-grown talent, staging urgent, radical theatre that continues to inspire. This will be Owen Calvert-Lyons’ first major season as Head of Theatre and Artist Development at Ovalhouse – London’s longest serving commissioning theatre.

Owen Calvert-Lyons, Ovalhouse’s Head of Theatre & Artist Development, comments, It is such a privilege to create a theatre programme for this iconic venue. Ovalhouse has an extraordinary history as a home for radical theatre. In the 1960s, ‘70s and ‘80s all of the revolutionary theatre movements had a home here. From Gay Sweat Shop to the Black Panthers, Ovalhouse ensured that marginalised voices and ideas were brought into the mainstream. My first season intends to continue that great legacy; ensuring that new artists, with new things to say, have the space in which to say them, to ensure that we take risks on both art and artists. Our job is to ensure that we create an environment in which the next radical theatre movement, when it comes along, is recognised, nurtured and championed.

Ovalhouse’s Spring Season provides an imaginative and innovative collection of eight FiRST BiTES; these new works-in-development are a chance to see raw new ideas by a diverse group of artists. The new FiRST BiTES are:

I am a Tree by Jamie Wood (1 – 2 February, 7.45pm)
Jamie Wood returns to where he was born to try to find out the valuable lesson his granddad had taught him; a homemade pilgrimage, a return to roots, slow motion time travel. The show will be something else entirely.

The Dark by Nick Makoha (2 – 4 March, 7.45pm)
A new one-person live literature experience written and performed by award-winning poet Nick Makoha. What unfolds is a story of those who find themselves exiled, with allegiances split between their birthplace and their new country.

Milky Peaks by Seiriol Davies (9 – 11 March, 7.30pm)
A bad man is murdered in a niceish hotel, an arts administrator hides a terrible Mafia-based secret (she was in the Mafia), an evil councillor makes a land grab, and - at the centre of it all - a ropey drag queen fights for survival in a changing world.

Pot by Ambreen Razia (30 March – 1 April, 7.45pm)
From the team who brought you The Diary of a Hounslow Girl, writer Ambreen Razia returns with her second play. Pot is an exploration of the landscape of Britain’s invisible children, adrift in the care system and inadvertently impacted by gang culture. A generation of young men find themselves burning with resentment without the money, power and sex they think they deserve.

The Believers Are But Brothers by Javaad Alipoor (7 – 8 April, 7.45pm)
A generation of young men find themselves burning with resentment without the money, power and sex they think they deserve. What happens when the crisis of masculinity leads you into an online world of fantasy, violence and reality?

Quarter Life Crisis by Yolanda Mercy (13 – 15 April, 7.45pm)
Ovalhouse Associate Artist Yolanda Mercy is back with a coming of age comedy which features live music and audience participation. This is an upbeat take on the millennial phenomenon of big dreams, no cash, YouTube tutorials and going viral.

So Many Reasons by Racheal Ofori (20 – 21 April, 7.45pm)
Melissa reflects on her relationship with her own mother, and on how much – or how little - the world has changed for women. So Many Reasons is a new work inspired in part by Anna Reading’s A Letter to my Dear