Scenes from Post-War London 1946 - 1960. The Early Paintings of Terrys Scales 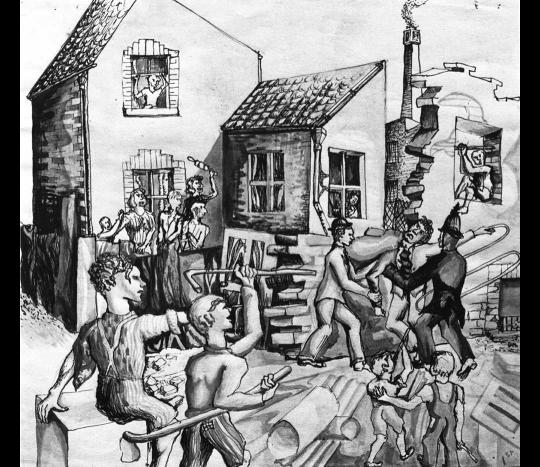 Summary; Returning from an idyllic childhood as an evacuee in Devon to the trauma of war torn Bermondsey, Terry records through his teenage pen and ink drawings the chaos and energy of his surroundings, as he begins life as a 13 year old student at Camberwell School of Art and later as a young adult shows how his passion for documenting the working life of the Thames began. There will be a free talk by the artist at West Greenwich Library 9th June 3 - 4pm.

Press Release;
In 1945 I returned to London from a carefree childhood as an evacuee in Devon. The contrast between the steady continuity of farming and fishing communities and devastation of London resulted in a culture shock stimulating my first serious works depicting scenes from war-torn Bermondsey. These were mainly pen and ink drawings, made immediately on entering Camberwell School of Art as a junior student at age 13.
The school was then in its finest period. The staff formed two opposing camps; the Euston Road Group under William Coldstream, who bought my first picture sale, and the Neo-Romantics under John Minton, Keith Vaughan and Susan Einzig. The mantra of the Euston Road Group was ‘Always study the particular’ and this detail is very evident in my early pen and wash drawings where a cracked drainpipe clings to a bombed out building, street urchins squabble and black clouds race over dismal railway arches.
While the sober Euston Road group gave sound drawing instruction, for me it was the Neo Romantics who supplied the vision. They spoke to my soul which as a child had soaked up the sensations of Devon countryside; observing one day the rich markings on an adders back and on another the intense red of the clay cliffs. Minton often drew along the Thames shoreline close to where I then lived, and it is true to say his rich, detailed observations were a strong influence on me throughout the late 1940s.

My new city life both fascinated and repelled me. Later influences into the 50’s and 60’s after National Service and a short brief as a commercial artist were, most significantly, joining my father as a stevedore in Surrey Commercial Docks where I worked all the wharfs between Tower Bridge and Woolwich. This experience not only provided a wealth of insight and material for later work, but I also became the sketch artist for the personality page of Surdoc magazine under the name ‘Justice’. Many of these early works will be on show. By 1960 I had been asked to join the teaching staff at Camberwell where a new chapter began...
In forming the idea for this exhibition I realised I kept asking the question ‘but why show works made in my teens?’ Perhaps it is something to do with tracing ones first creative impulses and discovering whether time had filtered some of these emotions into my present paintings. Overall there is a strong feeling that ‘memory is identity’.