Death of the King - An Immersive Punk Murder Mystery 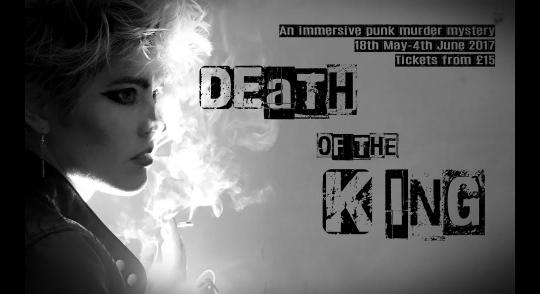 In the basement of an abandoned rug factory, deep under the streets of London, a psychologically-thrilling immersive mystery awaits you.
It was from this building, a derelict squat at the height of the punk movement, that Rusty disappeared in 1983.

Rusty’s disappearance was never investigated. The ravings of his previous housemate, Alex, about a body in Borough fell on deaf ears. They were dismissed as the incessant ramblings of a ‘madman’ and confined to the asylum where he lived.

Rusty became a vague memory, a forgotten secret, until now…

33 years have been and gone since that night. A body has been uncovered. Jack an ageing rock star and actor who was at that party, has come under suspicion. In a bid to protect his public image and clear his name he has hired the expertise of a rather unusual individual, one who specialises in "resurrecting" forgotten things.

Jack invites you to become part of the story, bringing you back to that fateful night; the last time Rusty was seen alive.

Unlock secrets, expose lies, and try to seek the truth about what really happened.

This is a murder mystery like no other, and not for the faint of heart. Be prepared to learn more about yourself than you thought possible in this fully immersive theatrical performance.