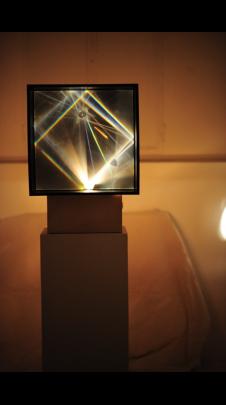 The directors of ArtCircle are delighted to announce its first exhibition, Focusing Room, a presentation of works featuring Adolf Luther, Heinz Mack, Alberto Biasi, Nanda Vigo and Christian Megert of the Zero movement, as well as artists Nicolas Schöffer and Peter Sedgley.

Forged in the late 1950s by the German artists Otto Piene and Heinz Mack, Zero fostered artistic discovery by promoting a new environment unconstrained by past traditions. The ‘zero’ in the name exists to highlight the group's affinities with Minimalism and Italian Arte Povera. Many of the works that feature in the presentation have never been shown in the UK before, and include Adolf Luther’s epic installation, Focusing Room (1968), on loan from the Museum of Modern Art in Goslar, Germany. Comprised of twenty concave mirrors arranged on sets of five on a wooden table and spot-lit from above, this interactive installation renders light visible as its own autonomous, matter-less medium.

The artwork was originally created for an exhibition at Utrecht University, and at the time included a medium that is, perhaps, inconceivable today: cigarette smoke. The concept was that viewers who smoked would cause some of the otherwise invisible light beams surrounding the installation to be seen. Today, this effect is instead achieved with a fog machine.

The exhibition’s curator, Bettina Ruhrberg, says of the show: ‘The art of the 1960’s and 70’s was revolutionary art for a revolutionary age. A whole generation of artists both in Eastern and Western Europe, and in America, were fascinated by the phenomena of light and the perception. Enthusiastic for technology and geared to science, the artists saw themselves as experimental researchers in the field of optics. Their interest was concentrated on the seeing process in motion. They abandoned the traditional pictorial space and integrated practically the whole sensory apparatus into their artistic concepts. Using industrial materials
such as mirrors, fluorescent tubes, aluminium and Perspex, they made beholders and their movements integral components of the artwork. This art set out to surprise, involve, overwhelm and appropriate the beholder.'