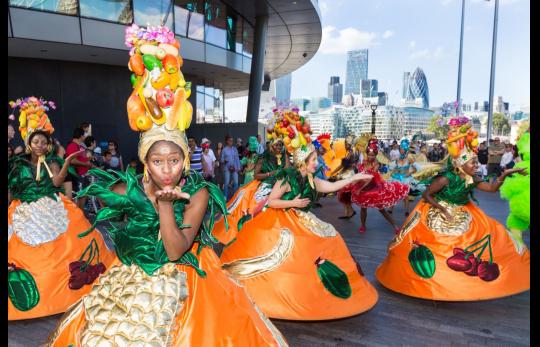 Throughout June and July, the onsite big screens will host a range of exclusive film screenings including The Lego Movie, Finding Nemo, Johnny English, plus Cool Runnings and Bill & Ted’s Excellent Adventure hosted by Nightspot Cinema. Key sports events will also be shown, with Wimbledon, Lions v All Blacks, the ICC Champions Trophy all making the cut. The Tour De France hasn’t been left out, with cycle themed bar Look Mum No Hands! showing the race on their big screen - The perfect viewing to accompany their range of craft beers and prosecco on tap!

The festival will buzz with the sound of live music with performances from the likes of Liam Bailey, Nick Manasseh, Prince Fatty Soundsystem, Afriquoi, New Orleans Swamp Donkey and Aleh Ferreira making up just a fraction of the roster. The festival will also shine a light on some of London’s unsung heroes with performances from a selection of the city’s finest buskers every Thursday through Sunday.

For those keen to get involved, mass karaoke sensation Massaoke runs every Friday throughout June and Gospeloke will be giving punters the chance to sing with a full choir backing on 28th July. Club De Fromage kick off the weekend on Friday 7th July in legendarily flamboyant disco style whilst interactive quiz, Last Man Standing will be testing the capital’s nerves, skill and knowledge with classic quizzing and nostalgic party games on Wednesday 12th July. If bingo is more your style, DJ’s Rapture and Jonny Unknown will host Musical Bingo on Wednesday 5th July with prizes on offer.

Keeping the festival moving, stretching and dancing from London Bridge, right the way down to Tower Bridge will be a host of fitness classes and dance workshops hosted by the likes of Reggae Aerobics, Fitness First and Third Space’s Alfresco Fitness, Disco Yoga, Havana Londres, and Swing Patrol.

Consider the school holiday sorted with fun filled range of activities on offer for all the family during weekdays and weekends. Highlighting the talents of young Londoners, Albert & Friends Instant Circus and Flying Seagulls Project have all things Circus covered from acrobatics, to plate spinning. For those youngsters with more energy, BBoy Breakdancing Comp, 50 piece traditional Brazilian Samba troop UDM Samba and mother and toddler yoga classes with Jungle Boogie are guaranteed to keep youngsters on their toes. On 29th of July, the Hays Galleria’s Garden will host a very special party as Fantasy High Street’s Mad Hatter’s Tea Party lays on a fun, immersive feast for the whole family.

Drawing on London’s love of comedy, Scummy Mummies, Thom Fooles House Party, Abandoman, Hans Haus Party and more, will have the site in stitches with their varied mix of character and stand-up comedy. July 26th will see the great and the good of comedy perform as part of A Taste of Fringe all hosted by Mark Dolan (Balls of Steel, The Jump).

This unmissable schedule of entertainment will take place at three distinctive locations, running from London Bridge to Tower Bridge. The amphitheatre-style steps of The Scoop, the beautiful historic architecture of Hay’s Galleria and the riverside promenade at The Pier. London Bridge City will also host the return of the London Riviera, this year celebrating all things Mexican and featuring irresistible dishes from Taco Revolution.