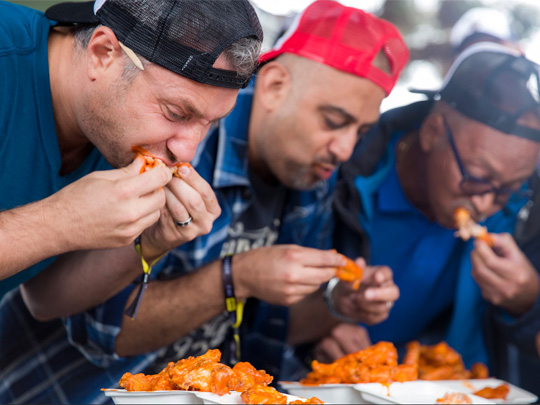 London Wing Fest is a celebration of the magnificent chicken wing!

Legend has it that the original Buffalo wing was conceived in the city of Buffalo, New York, at Anchor Bar using Frank's RedHot sauce. Buffalo wings have risen to dizzying heights of popularity, with the wing now at the centre of food festivals, sports events and bar cuisine around the world.

Wing Fest is a celebration of the mighty chicken wing. Restaurants, street food traders, bbq teams and pop-ups compete to see who really does do the best wings in the UK.

All wings are £1 and will be sold in individual joints (drums or flats) to allow voters to try as many wings as possible from each of the contestants. Ticket holders vote for their favourite wing using the Wing Fest 2019 app. Please remember to download the app when it comes available in August 2019.

For the greediest of wing eaters among you, the incredibly popular Frank’s RedHot Wing Eating Competition takes place on both event days.

Dr Sweetsmoke’s deadly Lava Wing Challenge, which causes carnage every year, will also be held on both event days this year.

?We'll have charismatic BBQ chefs ruling the roost on the Chicken Shed stage. Here you can expect tantalising cooking demonstrations, BBQ tips, fun shows and DJs later in the day!

There will be live blues music through out both event days, as well as DJs playing summer party vibe tunes into the night.