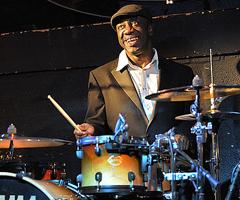 Over the last 30 years Frank Tontoh has established himself as a drummer of considerable versatility and accomplishment, playing in a wide variety of high profile settings that have cemented his enviable reputation as one of the finest players around. It’s fair to say that Frank was born in to the music business, his father Mac Tontoh being one of the founding members of the iconic highlife band Osibisa. Frank himself began his musical studies at MIT in Los Angeles before completing a degree in composition and arranging at Trinity College of Music, London along with old school friend Courtney Pine. In 1982 Frank went out on the road with Osibisa, touring worldwide with the band for almost 4 years. On returning to London in 1986, along with Courtney, he formed the first of the major bands he was to be associated with, the Jazz Warriors, before moving on to his own highly regarded band Desperately Seeking Fusion. It wasn’t long before news of this enormously talented musician working the London scene got out and he was soon first call for numerous high profile artists, both recording and live. Since then he has established himself as a major player, the list of bands and artists that he has appeared with over the years reading like a who’s who of contemporary music, including the likes of Craig David, Tanita Tikaram, Aztec Camera, Jason Donovan, Al Green, Level 42, George Michael, Gary Barlow, Paul Young, Des’ree, Lewis Taylor, Damage, Andrew Roachford, Mis-teeq and Gabrielle. He recorded and toured with the late Amy Winehouse (“Back to Black” tour) and to demonstrate his versatility and the respect with which his playing is held he has also worked with the likes of musicians such as Jack Bruce, Ernest Ranglin, Matt Bianco, Alex Wilson and Percy Sledge. You get the idea, he’s very good! The musicians supporting Frank tonight, as you would expect from someone with his longevity on the scene, are simply outstanding. Noted soul singer & multi-instrumentalist Lex Cameron (Roachford, Leon Ware & Music Director for Omar) will be contributing to the evening, as well as some of the finest soul and funk players in the business, including Ross Stanley & Alex Montague-keyboards, Tony Remy-guitar and Neville Malcolm-bass. To add even more glitter – if there wasn’t enough! - Frank has also lined up a host of serious Special Guest singers including Wayne Hernandez, Gina Foster, Ian Hoare & Tahirah. And if Frank’s previous gigs here are anything to go by, you can expect plenty of amazing Surprise Guests as well. This promises to be another brilliant evening of powerful soul and funk grooves -booking strongly advised!