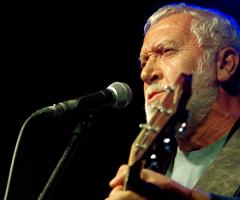 An old friend of the Club, Gordon Haskell is amongst that rare breed of popular artist who are actually more concerned about the quality and integrity of their music than its commercial potential. A musician and singer/songwriter for 50 years his experience is vast and impressive. He first started writing songs for other artists in the late 60's before completing his first album as a singer/songwriter in 1969. In 1970 he spent a brief time (9 months) in his friend Robert Fripp's iconic rock band "King Crimson" before returning to his solo career. He produced several solo albums through the 70's whilst at the same time playing bass with a variety of artists, including Cliff Richard, Alvin Lee and Tim Hardin. By the mid 80's his career as a solo artist was slowly taking shape with work in Norway, Denmark, Finland and Sweden and it was at this time he started to truly develop his smooth, worldly-wise voice and signature guitar style. He started his own label in the late 80's which saw a number of releases through the 90's, and at the same time he started to build a reputation on the singer/songwriter circuit in the UK as a special talent to watch out for. In 2001, he released the single ‘How Wonderful You Are’, which was to be a major turning point in his career. It became one of the most requested records on BBC Radio Two and reached No.2 in the 2001 Christmas chart. That was followed by the album and single of the same name, “Harry’s Bar”, both of which charted and went platinum in Europe. He followed this up with two more successful albums before taking a break from songwriting to write his autobiography, 'The Road to Harry’s Bar' followed by a move in 2007 to the Greek island of Skopelos. And there he stayed until 2016 when he decided to return to the UK to pick up creatively where he had left off, which is quite definitely our good fortune. Tonight Gordon will be performing with long time associate Paul Yeung on saxophone, so expect to hear songs from 'Harry's Bar' alongside others both old and new, many of which are featured on Gordon's newly recorded album 'More Than That', due for release shortly. Back in the 2000's Gordon was a regular here and it's a real pleasure to welcome this special talent back to the Club this evening.

“One of the great unsung heroes of popular music” Independent