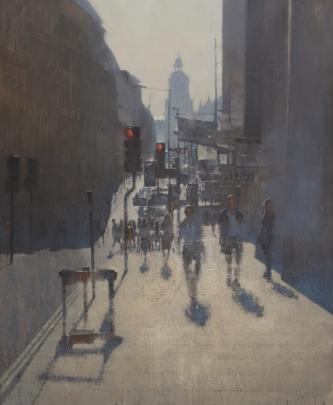 Works: A New Exhibition of Figurative Art by Benjamin Hope and Ben Hooper

Following the success of his debut solo show (Observations, 2015), award-winning painter Benjamin Hope has teamed up with sculptor Ben Hooper, for a new exhibition called Works. Over 50 new paintings of London by Hope will be set against Hooper’s bronze and wire sculptures in a striking juxtaposition of different media and techniques.

Almost all of Benjamin Hope’s pieces were painted on location in areas of the Capital such as the City, the Thames, Chelsea, Blackheath, Camberwell, Putney and Westminster. Signaling a new strand to his work, Benjamin will also present much larger studio paintings that were developed from plein air studies. According to Benjamin “painting from life is my modus operandi; I love the immediacy, the time pressure, and the liveliness of the result. Creating paintings in the studio is different. It allows greater scale but it’s not just a straightforward enlargement; it’s more like an exploration of how a complex layering of paint can help evoke the light and atmosphere of the moments I originally captured painting outdoors.”

Ben Hooper’s work focuses on the human form: seen from life, and through the lens of sculptural traditions of the past. Ben’s pieces will include his bronze nudes, a selection of his commissioned portraits and recent works in wire that respond to classical sculptures from both the west and the east. Ben explains “my wire works are drawings in three-dimensional space. Hidden within them is the potential for a multiplicity of two-dimensional images that are revealed when these sculptures cast shadows onto nearby surfaces.”