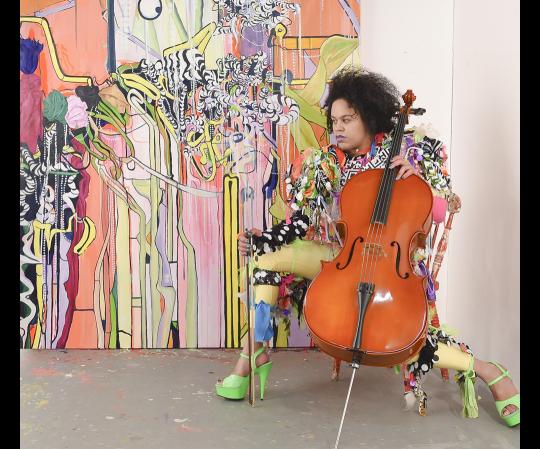 Transcending The Signified will explore possibilities for performing and existing beyond learned actions, language, familiar aesthetics, and socio-cultural boundaries.

Quilla Constance’s paintings employ a synergy between props, architectural structures and performative surfaces. For Transcending The Signified, two large-scale paintings will be exhibited as part of the architecture within the MOCA space. Fitted into two alcoves, the paintings, both intricate and imposing are set up to oscillate between sculptural and painterly interventions.

Through her performance on June 11th, Quilla Constance will deliver a surprising deviation from Edward Elgar’s Cello Concerto in E minor (first movement). Performing in front of her paintings, QC's sculptural costumes conflate with these surfaces through a merging of colours and textures. Are these paintings self-portraits or an abstraction of identities which suggest the performative nature of all identity? Is it possible for QC and indeed Jennifer Allen to transcend these (often injurious) familiar and ‘exotic’ surfaces?

Here QC questions notions of cultural authenticity, challenges disciplinary boundaries, and in turn, offers a raw and fresh frame through which Allen examines the construction and negotiation of black female identities within contemporary British society and high art.

Through Transcending The Signified QC invites the viewer into a dialogue through which the notion of cultural authenticity and the production of meaning is visibly contested.

Quilla Constance 'QC' is an 'exotic' militant punk persona created and deployed by Jennifer Allen to interrogate category driven capitalist networks and locate points of agency within systems of power. As QC, Allen stages and virally inserts aspects of her artistic practice within pop and social media culture, traversing music venues, forging street protests and entering art galleries in order to emulate, interrupt and critique the operations of these cultural zones.

All Transcending The Signified exhibitions and events are open to the public and entry is free of charge.