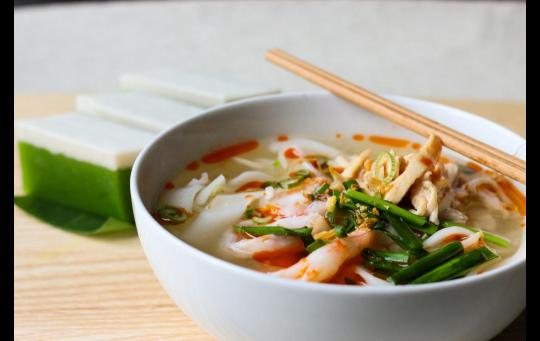 On the second Sunday of each month, Ping hosts her Breakfast Club at Chi Kitchen and creates an ever-changing set menu, exploring traditional dishes of South East Asia, all inspired by her Malaysian roots but with a personal twist.

Ping has called this month’s breakfast club ‘Memories of Ipoh' and has drawn inspiration for her menu from Ipoh, her home town and the capital of Malaysia’s Perak state. Available from Ping’s seventh Breakfast Club will be Lamb Murtabak, a Malaysian flat bread stuffed with spiced lamb mince served with pickled shallots. Also on the menu will be Ipoh’s Gai See Hor Fun - Ipoh's most famous dish - soft rice noodles in a chicken broth topped with slithering of chicken, prawns and garlic chives and drizzled with roasted prawn oil. Guests are also invited to kick start their morning with a fiery, detoxifying Carrot, Ginger and Orange Shot and enjoy Kuih Talam for dessert – a two layered Pandan and coconut steamed cake.

Chi Kitchen is a contemporary Pan-Asian restaurant offering tasty, colourful and exotic dishes that are both MSG-free and Halal. Influenced by Thai, Malaysian, Korean, Chinese, Vietnamese and Japanese cuisine, the food at Chi Kitchen is made using the freshest produce, maintaining a truly authentic taste.

In 2014, Ping Coombes became a household name when she was crowned winner of BBC’s Masterchef whilst showcasing her knowledge of traditional Malaysian and South East Asian cuisine. She has since been busy travelling around the world as a Malaysia Kitchen Ambassador, releasing her debut cookbook Malaysia: Recipes from a Family Kitchen and working Executive Chef at Chi Kitchen.