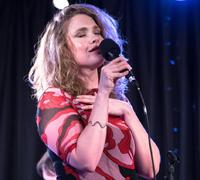 Polly is one of the most respected and talked about singers of her generation. Since first hitting the UK jazz scene more than 10 years ago while still in her teens, Polly has developed into a consummate performer with a sultry, distinctive style, as much at home singing tender jazz ballads as she is performing rockin’ R&B classics. A regular at venues up and down the country as well as numerous international jazz festivals Polly is perhaps best known in London as one of the resident singers with the Ronnie Scott’s House Band. In 2016 alone she opened the sold out UK tours for George Benson and Gladys Knight, had two acclaimed performances at the Royal Albert Hall and was a featured singer with the Liverpool Philharmonic in a presentation of the music and life story of John Lennon. Polly is also rapidly establishing herself in the US, with recent shows in Florida, Boston, Minneapolis, Kansas City, Oklahoma City, Los Angeles and Birdland in NYC. She released her critically acclaimed UK debut album "My Own Company" in 2014 and has followed this up with the recently released "Is It Me...?" (both on Resonance Records), tracks from which she will be performing this evening. The music is an eclectic mix of classic jazz standards, Groove-based tributes to the likes of Aretha Franklin and Donny Hathaway and several originals written by Polly and her musical director James Pearson (also featured this evening), one of which earned the two first place in the singer-songwriter category of the 2014 Indie International Songwriting Contest. Recently nominated Vocalist of the Year by Jazz FM, Polly is a very special talent who sums up her approach to performing like this: “I have found that singing is most inspiring for me when I bring a certain lightness of being to it, a certain joy and levity that allows me to communicate more fully with my audience – as if each moment was both ordinary and extraordinary at the same time”. A very old friend of the Club (Polly performed her first London gig here, back in the day) it’s with great pleasure that we welcome this remarkable talent back to the 606 leading her own quartet.

“Polly Gibbons…a truly exceptional, once in a generation talent, possessing a voice of such sizzling intensity and raw emotion you could fry an egg on it” Jazzwise; “"There’s a rare sense of joy in her voice, not to mention a depth of….feeling….remarkable” Evening Standard