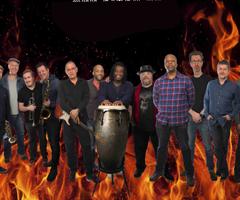 After a series of storming, sold out, gigs I can absolutely guarantee that this band is unquestionably very special. Put together by singer Tommy Blaize and bass player Trevor Barry from the Tommy Blaize and Strictly Come Dancing bands, along with their friend and studio vocalist Derek Green, this band was formed as a tribute to the great Maurice White and his iconic band Earth, Wind and Fire. The amazing band they have assembled to do this includes between them work with the likes of Stevie Wonder, Robbie Williams, Pet Shop Boys, Amy Winehouse, Kylie Minogue, Massive Attack, Courtney Pine, Simply Red, Will Young, Duffy, Celine Dion, Phil Collins, the Bee Gees, Steve Winwood...you get the idea. And having put together and rehearsed 14 of the finest players on the scene what they then needed was a gig! Which is where we came in. There was the slight technical issue of how we would get 14 musicians on our bandstand, but bassist Trevor assured me it would be fine(!), and the gig was born. The music is exclusively EW&F material and is played with an intensity and excitement that makes this ensemble much, much more than just a "tribute" band. The gig was intended to be a celebration of EW&F but has now also become a memorial to Maurice White, who sadly passed away last year. The musicians who will be performing in this amazing line up tonight include Tommy Blaize, Derek Green-vocals, Trevor Barry-bass, Dave Arch, Pete Murray-piano/keyboards, Tim Cansfield, Tony Remy-guitars, Barnaby Dickinson-trombone, Paul Booth-sax; Simon Gardner-trumpet; Karlos Edwards, Jody Linscott-percussion and Andrew Small-drums. This is a unique night of Groove-filled joy featuring some of the finest musicians in Europe, and booking is definitely advised.