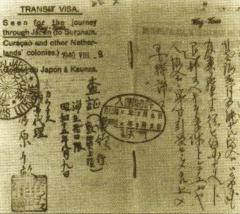 Chiune Sugihara, a Japanese diplomat based in the Japanese consulate in Kaunas, Lithuania in 1940, went against his superiors and granted more than 2,000 transit visas to Jewish refugees looking to escape Europe by travelling to Japan. Many more Japanese along the way assisted the refugees with their escape. The Simon Wiesenthal Centre estimates that they helped as many as 6,000 Jews to flee, and Sugihara was honoured as Righteous Among the Nations by the Israeli government in 1985.

Sugihara risked his life and career to issue these “Visas of Life”. Mr Tatsuo Osako, who was an employee of Japan Tourist Bureau (JTB) during the Second World War, was later seconded to Japan National Tourism Organisation (JNTO) to work alongside Mr Akira Kitade, the speaker for this event and author of Visas of Life and the Epic Journey. Osako told Kitade a story; a story of Jewish refugees who were sent to Japan to escape Nazi persecution during the war. They travelled from Moscow to Vladivostok via the Trans-Siberian railway before arriving in the port city of Tsuruga in Fukui Prefecture. Osako showed Kitade an album of photographs of the Jewish passengers he had accompanied on the ship, the Amakusa-maru.

After Osako passed away, Kitade was determined to find out what had happened to the people in the photographs and began his journey of discovery. Despite the dearth of information contained within the album, with the assistance of the Embassy of Israel in Japan Kitade was able to trace some of the descendants of the Amakusa-maru. Amongst them was Mr Leo Melamed, Chairman Emeritus of Chicago Mercantile Exchange (CME) Group, who visited Japan in 2014 to meet with Prime Minister Abe. Kitade later met Melamed in the US, who told him that without Sugihara, he would not have survived the Holocaust.

In this event, Kitade will share the stories of the fateful encounters between Japanese civilians and Jewish refugees at a time of life and death during the Second World War.

About the contributor:
Akira Kitade was born in 1944 in Ueno in Mie Prefecture. He graduated from Keio University with a degree in French Literature in 1966. He then worked for the Japan National Tourist Organization (JNTO), and was posted to Geneva, Dallas and Seoul. Now retired, he is currently a freelance writer. His book titled Visas of Life and the Epic Journey: How the Sugihara Survivors reached Japan (Chobunsha, 2014) was highly commended by the Japanese government and donated to over 1,000 major libraries across the world.