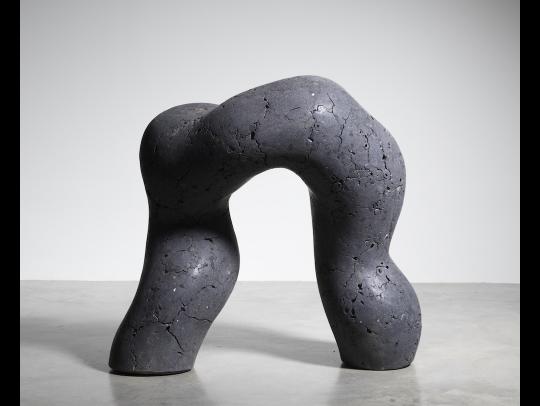 Claudi Casanovas’s third solo exhibition with Erskine, Hall & Coe will open in July. This will be the first occasion that we hold an off-site exhibition, and it will take place within the historic Fitzrovia Chapel. This exhibition will present the final instalment, Quart Minvant, of a body of work that began with Lluna Nova in 2013 and included Quart Creixent in 2014.

“Quart Minvant (Waning Crescent) explores the notion of emptiness. The pieces refer to a metaphorical journey, a moment in balance, which ultimately alludes to life: life in its final evanescence and its promise of completeness.” –Claudi Casanovas

Claudi Casanovas was born in Catalonia in 1956. He studied theatre in Barcelona and subsequently trained as a ceramicist in the Catalan city of Olot. He was a member of the Coure Potters' Cooperative from 1978 until 1987, and in 1992 he won first prize at the III International Ceramics Competition in Mino, Japan. In 2004, he won a competition to create a monument against Fascism in Olot. This Memorial als Vençuts was installed in June 2006. His artwork has been displayed in major exhibitions and museum collections worldwide, including The Hermitage Museum in Saint Petersburg, the Victoria and Albert Museum in London and the National Gallery of Australia. The Stuart & Maxine Frankel Foundation for Art acquired a group from the Lluna Nova series following his first exhibition at Erskine, Hall & Coe.

“I start with a model that arises in my imagination through shapes that slowly inflate or melt between my fingers. It’s the thing I told you about with the cube of dry earth that turns into a sphere. I don’t know the result a priori; I imagine it vaguely “wrapped in darkness,” and by rubbing and rubbing, like Giacometti erasing and erasing, the essential emerges, the possible subtractions, the necessary shape.

Afterwards it’s only a case of making it grow, giving it shape, realizing this embryo where everything is already formed. Complete agreement, then, with Master Giacometti. The few times I’ve followed an imitative process, starting for example from a Romanesque angel or the silhouette of a mountain by, let’s say, the painter Carme Sanglas, starting with existing images and simply transforming them, the resulting pieces have been soulless, quite anodyne. I still refuse to reject them — they too are — but I know they’re not much, and so that the more exuberant can grow, like in a forest where every once in a while the weak plants have to be removed so the strong can grow, I have to set them aside. It’s the difference between the imaginatio-vera and fantasies.” –Claudi Casanovas

The display at Fitzrovia Chapel will feature six large-scale stoneware sculptures, and to coincide with this show, we will be presenting a new hardback monograph (332 pages): Claudi Casanovas Ceramics: 1975 – 2015.