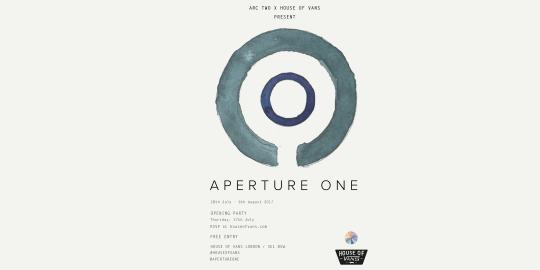 House of Vans London is excited to present Aperture One, a fully immersive site-responsive installation playing on the perspective of space within the Waterloo tunnels.

The gallery space of tunnel one will shape the basis of the installation and form a set of stunning circular openings spanning the tunnel. Drawing upon the universal symbolism of a circle, the viewer will travel down the tunnel in a linear sequence but will be free to roam and explore the apertures in whichever way they choose. The tunnel’s depth will be enhanced through light and chromatic intensity; together forming a kaleidoscope that draws the viewer through the installation enabling them to observe the forms and create their own narrative as they travel through the ensemble of openings.

Aperture One is a project from production design studio Arc Two, made up of design duo Aoife Blair and Tea Mulabdic. They met at Secret Cinema where they worked on numerous shows and Aperture One sees them build on their multi-disciplinary backgrounds in architecture, installation and performance design:

“Aperture One was inspired by the site. We wanted to create a piece that worked with the space, highlighting the arches. We were interested in the history of the space and how these arches would have been made, as well as what it is used for now. Photography was a big influence too; we wanted each aperture to act as a frame for the arches as well as for the viewer's presence in the space. We wanted people to move through the space more consciously. “ Aoife Blair and Tea Mulabdic, Creative Directors, Arc Two.

The House of Vans is where “Off The Wall” lives.

It’s a place where imagination lets loose over concrete bowls, art installations, workshops and concert stages, inspiring every person who runs, rolls, or stomps through its door. Located in Brooklyn, New York and Waterloo, London, as well as pop-ups around the world, the House of Vans is home to the creativity that moves us.