Wil Murray | The Onlyes Power Is No Power 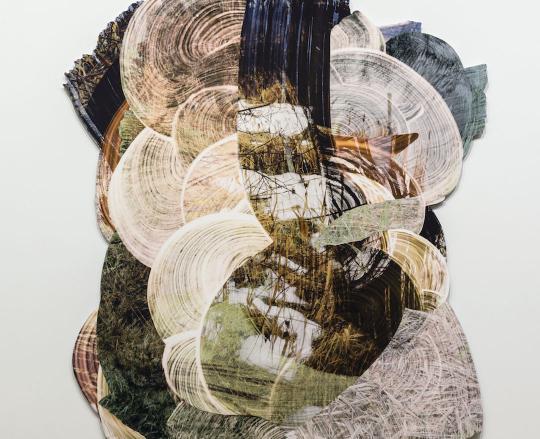 THE ONLYES POWER IS NO POWER is Wil Murray’s third solo exhibition with the gallery, presenting a new large-scale print series and exploring transformative mechanisms within the photographic process. The exhibition of these new works manifests itself as an experimental installation that uses light to further transform the works; the vitrine space acting as a large-scale camera.

Murray’s practice explores journeys as transformative mechanisms, exploring how meaning changes as an object moves from one point to another. He uses a hybrid of photography and painting to highlight the role of time and substance within this journey. In these new works Murray paints directly onto the photographic negative, allowing this mark to evolve, form and ‘black out’ within the process of exposure and development.

THE ONLYES POWER IS NO POWER examines the geographic, historical and personal overlap between the trajectories of Hoffman’s Novelty Circus, a circus run by Murray’s family that toured each summer through Saskatchewan, Alberta and British Columbia from 1933 to 1943, and the deployment of Japanese Fu-Go “balloon bombs”, over one hundred of which fell on the Canadian prairies between 1944 and 1945. The title of the series and exhibition is a quotation from Russell Hoban’s post nuclear-apocalyptic novel Riddley Walker.

Each work, in the series of five, are Ditone Archival Pigment Prints and measure 175cm x 140cm cm. For this exhibition, the artist proof of each photograph will be installed in the unique vitrine gallery space and black paint strokes will be painted on the facing window. During the run of the exhibition, the works will be subjected to light. The arcs of the shadows of the black paint strokes moving across the works as the sun moves through the sky; shielding some sections from fading while exposing other sections to be altered by light. The exhibition space will be transformed into a camera and the photographs act as players in the exhibition-long performance, pushing Murray’s transformative process further and permanently altering the works composition.

THE ONLYES POWER IS NO POWER will be exhibited at VITRINE following its first presentation at the 2017 Alberta Biennial of Contemporary Art, at The Walter Phillips Gallery, at the The Banff Centre for Arts and Creativity, June – September 2017. Generously supported by The Canada Council for the Arts and The Alberta Foundation for the Arts.