Dowding and WWI - The Making of a Commander 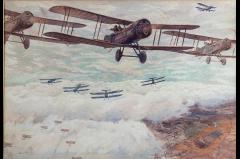 The exhibition explores the WWI experiences of Royal Flying Corps pilot Hugh Dowding, and how his experiences shaped his convictions and leadership as Commander-in-Chief of Fighter Command during the Battle of Britain in 1940 – based at RAF Bentley Priory, Stanmore. Without Dowding's leadership during the Battle of Britain, the outcome for Britain could have been very different, with Nazi invasion of Britain highly probable.

Alongside Dowding’s personal experiences, the changing role of aviation is also investigated. Once thought of as an ‘useless and expensive fad’, the exhibition charts the rise of air power and the rapid inter-war developments to aircraft.