Paul Abbott & Alex Roberts: What Hat am I Wearing Today? 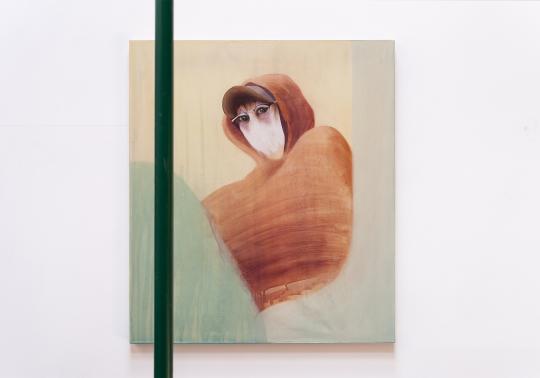 In their duo-exhibition at MOCA London, Paul Abbott and Alex Roberts present What Hat am I Wearing Today?, a multi-media installation exploring the non-stable identity-reality of living and working in the second decade of the 21st century.

The install offers images of the everyday and passed by spectacle alongside fragments of intimate disclosure. The slogan on an ice cream van: often licked, never beaten; a tattooed and made-up commuter caught in the glass of the S-Bahn; someone singing in the shower; a London resident’s narration of his dreams and strategy for survival.

In the setting of MOCA, its contrasting physicality and agenda is echoed in Abbott and Roberts’ exhibition. A space both industrial-modern yet domestic and intimate; cool yet warm; global yet local in its outlook finds parallels in the work. Abbott’s video/sculptural practice and Roberts’s painting practice are pushed into opposition and cohesion. Working independently, yet collaboratively, they aim to explore the possible pathways of contrast and cohesion that can be inferred from their collective installation.

A rack of t-shirts emblazoned with the word ‘Wanker’ by Abbott might be a gesture of self-deprecation or simply a nod to a kind of uniform we may wear every day; routine. Set against this is a series of Roberts’ painting ‘stills’ or ‘blanks’. They might be flashes of light caught in her daily S-Bahn commute; or swatches of industrial powder-coated colour typically found in the interiors of trains.

This humanity may be materialised as fragments of narrative and spectacle in Abbott’s and Roberts’ separate work. Displayed on small CRT monitors, video insights of former students of Paul’s are shown (he works as an English Language tutor.) Their hopes, dreams, fears are displayed as those who may have a more precarious hold on 'place'. Roberts in contrast presents an image of a commuter on the S-Bahn, with her tattooed layers of ghoulish make-up staring at the viewer/artist. She is drawn to collected observations, snapshots of speculative instants and travellers from her journey’s musings. The paintings are possible portrayals of our personal realities as we too chase our tails while trying to retain our identity within shifting political realities, financial pressures; everyday survival.

It should be noted that the install is often the making of the work itself for both artists; testing-trialing-exchanging ideas; a shared discourse whose finalised work centres the viewer in making his/her own threads within and between the artists’ separate elements. For What Hat am I Wearing Today? it’s about daily survival, banal daydreams, the durability of the individual, transient authorship, and questioning the pace of life.