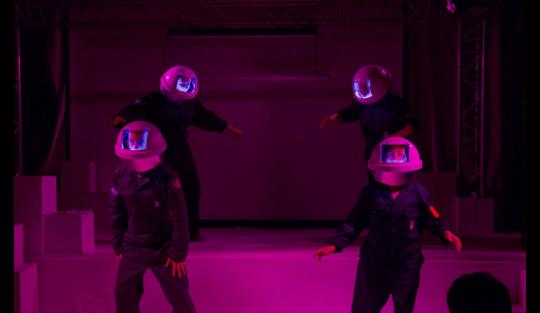 Four theatre makers sit around a kitchen table with the humble dream of getting Richard Branson to pay for them to take a rocket ship to space. Burdened by student loans, political mayhem, and the imminent destruction of planet Earth, these self-appointed astronauts train for the improbable: their chance at a literal journey to outer space. An inbox full of unanswered emails to NASA later, they are on a mission: to test the limits of the epic, the virtuosic, the chaotic, and themselves. If they fail, they fail gloriously.

Tacky Pioneer is an emerging London-based collective of theatre makers hailing from China, England, and the USA who met while studying on the MA Advanced Theatre Practice course at the Royal Central School of Speech and Drama. Our work explores the clash between pathos and absurdity, balancing the intellectual and the physical, the epic and the mundane. We are driven by a shared interest in experiential research and task-based processes.