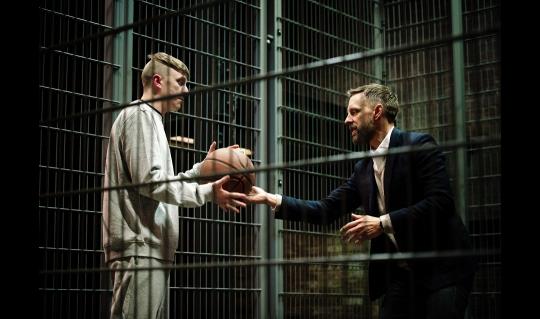 Sergio Blanco’s smash-hit, critically-acclaimed Thebes Land - winner of Best Production at the 2016 Off West End awards - returns to Arcola Theatre for 5 weeks only as part of the 2017 CASA Festival.

In this exhilarating multiple-reality drama, a playwright struggles to stage the incredible story of Martin Santos, a young man serving a life sentence for killing his father with a fork. As their interviews progress and opening night approaches, both of their worlds begin to unravel with shocking consequences. Will the truth be found, and can it be told?

Mixing fact and fiction, meta-theatre and reality, Thebes Land re-imagines the story of Oedipus to tell an unexpected story of redemption. With references that range from The Brothers Karamazov and Freud to Zidane and Whitney Houston, the play is a puzzle box that is deeply moving, visceral, intellectual and sublimely funny, all at the same time.

The UK premiere of Thebes Land took place at Arcola Theatre in November 2016. It won the Off-West End Award for Best Production and was also nominated for Best New Play, Best Production, Best Director and Best Set Designer. The original production of the show, directed by Sergio Blanco himself, opened in 2013 and has since enjoyed eight sell-out seasons in Montevideo’s Teatro Solis and toured to Argentina, Brazil, Colombia, Chile, and Spain. New productions are currently being produced in Spain, France, Mexico, Argentina, Chile, the US, Germany and Japan.

Daniel Goldman comments, It's incredibly exciting to be bringing Thebes Land back to Arcola for another run. I can't wait to share this amazing Latin American play with new audiences, while for those who have seen it before, there should be some new surprises for them too.

What a sharp, satisfying watch this is – a play that runs rings around its audience; riddles us like the Sphinx did Oedipus. Scene by scene, it slips out of reach. Fiction slides into fiction, rehearsals corkscrew into ‘reality,' and come the end, nothing's solid. Blanco does for documentary art what Dennis Kelly's Taking Care of Baby did for verbatim work. It holes it below the waterline… Goldman's production is engrossing and slippery (Matt Trueman, What’s on Stage).