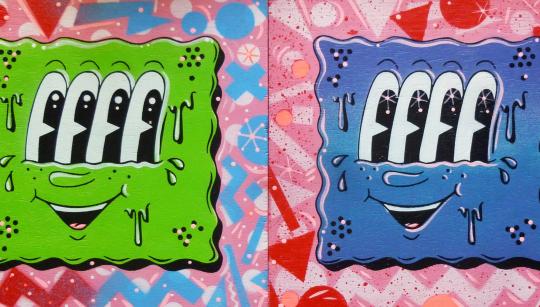 Having been on the scene for 32 years Vinnie Nylon has gained the respect of street artists old and new. In this new solo show, we bring together Vinnie’s past, present and future to show the heritage in his career as both a graffiti writer and contemporary painter that has gained the respect of UK urban artists; most notably internationally acclaimed artist Banksy once donated an artwork to fund his first London show in 2012.

Taking inspiration from a huge range of subjects including mid century art & design, advertising, cartoons and the wider history of modern art, Vinnie’s work offers the viewer an eclectic mix of subject matter, colour and form. His characters ‘Soda Pops’ and ‘Keefbobs’ are easily recognisable on the streets of East London and he now brings them into play for his first solo show at StolenSpace. His army of characters include; My T Toof, Valvo, Bright Spark, Lenny Crackfix, Bill Green and many more.

Vinnie Nylon’s visual playground is the product of a lifelong obsession with collecting post war products, badges, cartoons, toy figures, and advertising mascots. In his youth he was also a passionate devotee of the punk movement which led him to the new wave art & music scene of New York's east village and the wealth of artists active within it.

By placing iconic characters into scenarios where they can meet head on, Vinnie creates a new dialogue, seeing what noise they make when they clash and experimenting with different visual juxtapositions to create something fresh and new.

Vinnie sums up his 'manifesto' as a "potent mix of the 50s, skating and indelible graffiti"- where icons of consumer culture have been reinterpreted and given his personal twist.

‘Indelible Elegance’ brings together Vinnie’s passions and inspirations into one kaleidoscopic show.