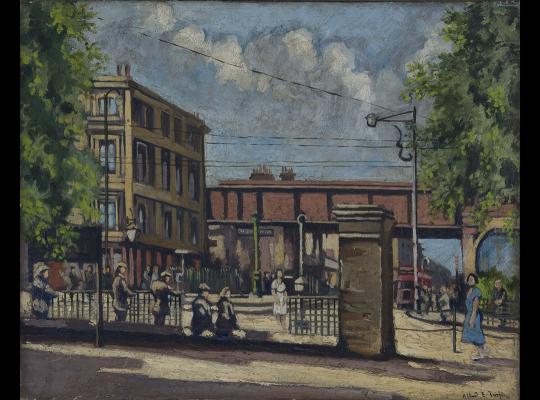 The historic East London Group returns to the Nunnery Gallery, selected and curated by writer broadcaster Michael Rosen and radio producer film-maker Emma-Louise Williams. Discovered in family collections and public institutions across the country, many paintings are returning to Bow for the first time since their production. With a focus on member Albert Turpin – who, as window cleaner, fireman and leading member of the anti-fascist movement, was the ultimate ‘working artist’ – three new public works of art, commissioned to commemorate the Group, will also be unveiled alongside the show from Lindsey Mendick, Marcus Orlandi and Maxima Smith.

Working during the inter-war period, the East London Group was made up of ordinary working men and women, attending art classes – Walter Sickert was among their teachers – and exhibiting paintings alongside their day jobs. There were thirty-five members and the exhibition includes works by B A R Carter, Elwin Hawthorne, Brynhild Parker, the Steggles brothers and Albert Turpin – all of whom immortalise the buildings and streets of the East End in their work.