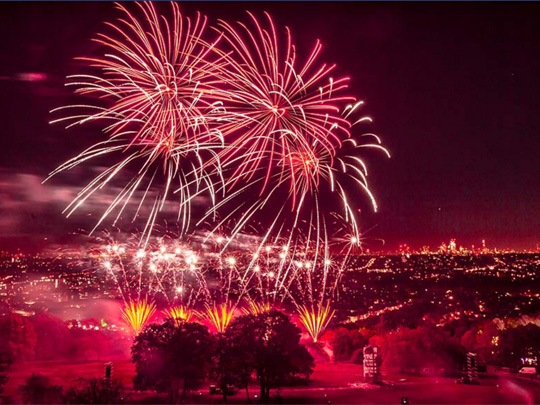 Boom! No-one does fireworks quite like Ally Pally. We’ve been letting off zingers, sending up sky rockets and spinning Catherine wheels into London’s heavens for over 150 years. Watch the capital’s skyline sizzle and whizzle from the most spectacular vantage point imaginable, and bring a pocketful of OOOHHHs and AAAHHHs.

The spectacular fireworks show will be curated to a special music soundtrack put together by Radio 1 and BBC6 Music presenter, Rob Da Bank, the person behind Bestival and Camp Bestival

Willkommen! See Ally Pally’s Great Hall transformed into a gigantic German Bier Keller for two unforgettable bonfire nights! Don your Lederhosen and join us in the Great Hall for two nights of the best beer this side of Munich, delivered straight to your table, with loads of loud music from two tribute acts, The Killerz (Friday) and a tribute to Elton John (Saturday).

The Ally Pally Ice Rink will be open throughout the Fireworks Festival. Glide your way around the ice rink, skating to a disco soundtrack of lively and fun music. Singing is optional!

It wouldn’t be a festival without music! This year there’s lots to enjoy throughout the park.

The StrEATlife Village will play host to live music from renowned DJs Rob da Bank (Friday) and Jazzie B (Saturday). Dance the night away as former Radio 1 presenter and Bestival-founder Rob da Bank, and Soul II Soul founding member, Jazzie B, bring the party to the Fireworks Festival.

Our restored Victorian theatre which reopened in December 2018, will host The Luna Cinema to show a selection of movie-greats on both nights.

Friday night's movie will be Harry Potter and the Philosophers Stone and on Saturday night we will be showing Silence of the Lambs.