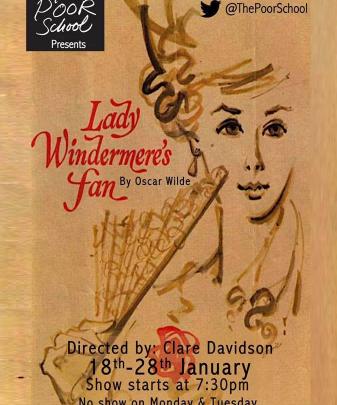 £10 on the door, complimentary tickets for industry

Reviewed by Matthew Partridge from London
Lady Windermere’s Fan is regarded as one of Oscar Wilde’s strongest (and in some ways most substantial) plays. Its large cast makes it idea for drama school showcases.

The play revolves around the three main characters and it helps things immensely that each of the three main roles is well cast. Sophie Wilson is a powerful, yet fragile, Lady Windermere. Frankie Hyde-Peace is commanding as the woman who turns out to be different than she first appears, while Pitcher strikes the correct balance between compassion and priggishness. The supporting cast also perform well, especially Robert Eades as Lord Darlington, in love with a woman he can’t have, Richie Daysh as Lord Augustus Lorton, willing to accept any explanation from Erlynne, and Hilary Barnes as the Duchess of Berwick, desperate to find her daughter a husband. While not perfect, this is a strong production that brings out the major themes of the play.