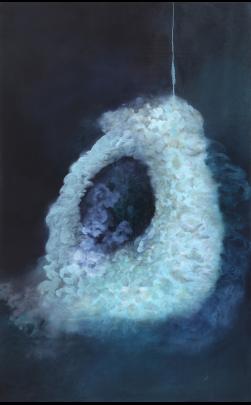 “Morris has coined the phrase ‘the viral sublime’ for her painterly investigation of viral landscapes, these hidden, almost fantastical worlds that will either support or destroy the organism that hosts them…By inhabiting the viral sublime of her imagination, her paintings take us into ‘a far more than her’, an immensely rich seam of knowledge at a new turning-point in medical science which is rarely represented in visual art. Morris’ anti-Romantic reworking of the sublime keeps terror, or at least an unsettling queasiness, in mind, rather than surrender totally to awe and beauty. We are always aware that while the beauty she creates is undeniably seductive, it can be fatal. Morris builds a unique and stunning visual vocabulary out of that dynamic paradox”.

‘Of Blooded Things: the paintings of Suzi Morris’ by Cherry Smyth.


As viruses are now digital avatars in genomic medicine, one of Morris’ objectives is to highlight how genomics is revolutionising mainstream healthcare and what it will mean in general medical practice. The implications of these modifications are vast, generating questions about the proximity of Huxley’s Brave New World where the natural processes of birth; ageing and death are no longer recognisable.

“Art has many functions, and I have increasingly come to understand to varying degrees, that my paintings are the result of a process of embodying my imagination’s relationship with what I experience within my body.”
Suzi Morris


With a devotion to the substance of oil paint Morris presents this inaugural solo show, as a mini-retrospective of large-scale and smaller paintings completed over the past few years. The sciences of virology and genomics capture her imagination in multifarious ways and have become a medium through which decisions are made in her painting. Each canvas is composed of multiple veils of translucent colour leading the eye from translucent pools through to denser areas, built up over time as the paintings evolve through a process of composition and erasure. This is the first time that she has exhibited diptychs and triptychs that comprise both aluminium and canvas in London.

Dr Suzi Morris was born in Ayr and originally studied Illustration and Design at Kingston University. The City & Guilds of London Art School marked her commitment to full-time painting, where she completed an MA in Fine Art before undertaking a practice based Professional Doctorate in Fine Art at the University of East London in 2017. Formerly an art director in film, in 2016 she co-founded the da Vinci Artists Residency and has since been awarded a da Vinci Artists brush in her name. She now lives and works in South London and will feature in ‘The Residency’, a documentary to be released in 2018. Her work has featured in several exhibitions in the UK and Germany with work held in private collections in France, Germany, Thailand and the UK.