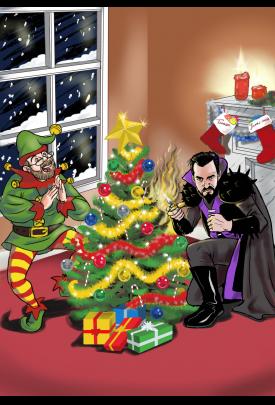 'Twas the night before Christmas... A plan was unfurled
To help Doktor James to take over the world.
With his minion’s help, and through some fun & games,
his mother and twin would respect Doktor James.......

If you had the good fortune to come and see the London premiere of Doktor James's saga's first instalment at Draper Hall, this fantastic comic character needs no further introduction.

In case you are a newbie, welcome! And we will get you up to speed in a jiffy: Doktor James has a superhero as a brother and their mum has undeniably a favourite son....guess which one.

Doktor James thinks he can readress the balance of power, with the help of his Minion, by embracing the dark side and plotting world domination.

Let's say that previously his plan did not go exactly as he expected....but this time round he can't fail....or can he?
This is truly a show for kids and grown ups alike and it will be followed by a winter supper (with at least one vegan dish), all included in the entry price!

Review for Doktor James' Akademy of Evil
(Fest)
A spiky shoulder-padded Doktor James sulks and throws tantrums like an overgrown teenager. He and his Minion create an air of controlled chaos that works as well for adults as for kids
With its giddy sense of fun, blasts of disco, tinfoil and games of "Cake or Bomb?", this stupidly enjoyable hour is like the evil twin of Blue Peter. You’ll leave wanting to take over the world.