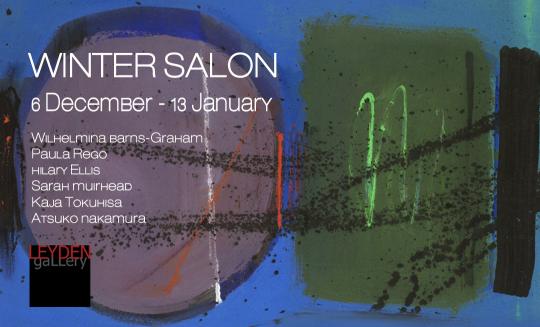 With the festive season fast approaching we are pleased to announce the opening of our annual Winter Salon.

The exhibition will consist of artworks by six known artists and a few suprise artists who have been specially selected by the gallery. This show will give us an unrivaled opportunity to revisit the work of the brilliant artists who have graced the walls of Leyden Gallery in the last four years.

Wilhelmina Barns-Graham’s dual status as both a St Ives and Scottish artist has long been acknowledged. Her work is held in major collections of art including the Tate and has held two solo exhibitions here at Leyden Gallery. In this exhibition we are pleased to present some of the prints created at the Graal Press and two painted artworks. The work incorporates the Graal Press' ground-breaking development of water-based screen printing inks with Barns-Graham’s individual brush marks captured on acetate.

Paula Rego began painting as a young girl at home in Lisbon. She came to school in England in her teens and went on to study art at the Slade School of Fine Art, London. The works exhibited here are the fruit of Regos introduction to Curwen Press where she started editioning. Her working method was to develop ideas in her studio and then take the drawings to Curwen to be translated into lithographs. She pursued a process of experimentation, trying all the various forms of lithography, from stone, to zinc and aluminium plate; sometimes combining the processes together.

Hilary Ellis studied Fine Art at Liverpool John Moores University graduating with a First Class Honours Degree in 1996. During 2005-07 Ellis went on to study Printmaking at Camberwell College of Art, achieving a Distinction in her MA. Over the years Ellis has continued to exhibit throughout the UK and has been awarded several distinctive prizes for her artwork. Ellis’ works are mixed media aggregations of repeated marks and actions which are intended as exact replications but whose inevitable deviations expose the frailty of the human hand in attempting the pursuit of mechanical process. The use of thread and beads is deliberately reminiscent of the labour intensive toil of the sweat shop whose employees’ existence is reduced to a series of stitches.

Born in Glasgow, Sarah Muirhead graduated from Edinburgh College of Art (ECA) in 2009. Muirhead was nominated as one of '10 New Sensations' by a panel including Kirsty Wark. Her portrait of the scientist Anne-Marie Imafidon was commissioned by Oxford University for their permanent collection as part of their recent Diversifying Portraiture initiative that aims to broaden the range of people represented at the University. The works on display will be her newest works from the second solo exhibition consisting of a collection of images of people she knows, many of whom are idealized or adored. Viewed through a psychoanalytic lens, Muirhead’s paintings are said to focus on depictions of professional extroverts; often performers, who offer an expanded creative sight/site by which to illustrate the feelings and desires of an introvert, namely the artist.

Kaya Tokuhisa started painting under the mentorship of Noriaki Sangawa, a Japanese artist who is a member of the internationally recognized art group Ryu which was founded by the acclaimed artist Tosihiro Hamano. Kaya's work met with immediate success when her first ever submission to an international painting competition (Utazu Art Award 2016, Japan) featuring many prominent international artists. Tokuhisa mostly paints in the style of classical realism and prefers to work from life whenever possible in order to accurately judge subtle shifts in light and colour. She is constantly studying the techniques and the works of old and new masters and implementing the knowledge into an evolving