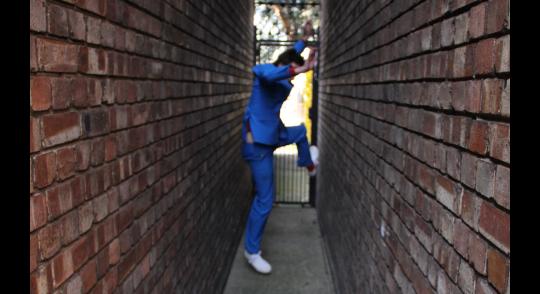 A man sits alone in a room and starts to feel sad. An audience watches him in real-time as he tries to make himself feel better by whatever means necessary – dance, song, web-building, imagined conversation, physical endurance test, even the odd attempt to reach out to another actual, real human being instead of just trying to force an emotional connection with the hopeless AI that lives inside his phone.

60 Minutes After Feeling Sad is the the latest work-in-progress project from cult alternative comedian and idiot, award-winning comic actor and award-nominated writer Joz Norris. It aims to explore happiness and where it comes from, sadness and where it goes, loneliness and how to cure it, and communication and how to escape from it. It also aims to explore a new imaginative space somewhere between “comedy” and “theatre” by taking a form halfway between theatrical monologue and off-beat stand-up. A show that’s not quite aware that it’s a show, but isn’t quite fully conscious of being a play either.

The show is written and performed by Joz, and produced by Barney Norris, an award-winning and acclaimed playwright, novelist and theatre producer. It is directed by acclaimed alternative comic, actor and writer John-Luke Roberts and designed by award-winning lighting designer, stage manager and set designer Tanya Stephenson.