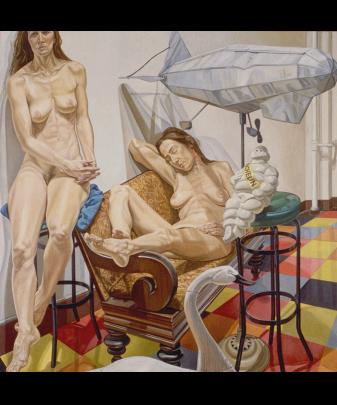 SALON, in collaboration with Betty Cuningham Gallery, New York, is delighted to announce its fourth exhibition, Paintings 1990 – 2017, a presentation of works by the revered American artist, Philip Pearlstein.

Pearlstein, now 93, has had an active career in the US and abroad since the mid-1950s. He first studied painting at the Carnegie Institute of Technology where he met Andy Warhol. Upon graduation, Warhol and Pearlstein moved to New York together to seek work in commercial design and pursue their own fine art careers. Pearlstein worked in an abstract expressionist style in the 1950s, before shifting to realism.

This show, which is comprised of eight large- scale works in oil, is a celebration of his depiction of the human nude, a subject that has preoccupied Pearlstein since 1960 – as he says, ‘it is a shape that is always changing.’ In the 1980s, Pearlstein began to surround his sitter with objects from his personal collection to further engage the viewer and challenge himself. This exhibition highlights the strategies he employs in creating a complexity in his paintings that continues today.

Models and Blimp (1991), with its Michelin man, decoy swan and antique weathervane, is illustrative of Pearlstein’s mature work. While the props around the two female models intrigue, they are not there to create meaning or narrative. For Pearlstein, painting is abstract, it is just painting: his approach to living, human flesh is the same as to inanimate objects.

In this work, as with others, Pearlstein chooses a point of view that creates the most challenging composition for him to paint, and for the beholder to view. The unsettling effect of the skewed, oblique angles and perspectival compression is further reinforced by the truncation of the head and legs of the model in the foreground.

Masterful and powerful, every painting featured in the show goes against the conventions of portraiture – often emotive and introspective. Pearlstein’s works maintain a sense of complete detachment, which is both alluring and disconcerting.