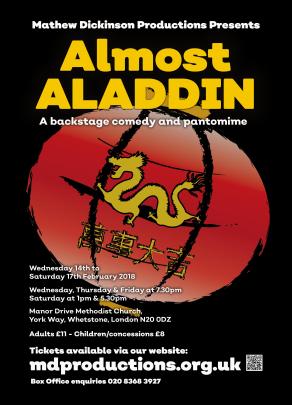 "Under the direction of the renowned Vicky Attenborough, some of the United Kingdom’s greatest names in provincial touring theatre are joined by national treasure, Bechinda ‘It’s Washing Day’ Buzzelnap and the darling of Broadway, Brandy Butterly, to bring you one of the country’s most loved pantomimes, Aladdin."

?Well … almost. With an over-the-top director, a cast of prima donnas, and an unruly backstage team, what could possibly go wrong?

Almost Aladdin combines a backstage comedy of inflated egos and an entire pantomime in the second act with Mathew Dickinson Productions’ usual mix of song, dance and slapstick comedy in a show suitable for the entire family.