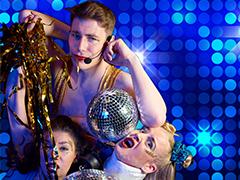 Fresh from a five star Edinburgh Fringe run, DOUZE comes to VAULT in London for four performances only as Xnthony and The Penny Slots make (another) Eurovision comeback. Armed with a host of hit songs to choose from, this loveable poptastic comedy will leave you in stitches. They’re making a bid to represent Ireland in the next Eurovision but need your help in picking the winning song. Aiming for Douze Points and European glory, they’ll do anything to get there. Winner of Best Comedy IYAF 2016, the smash-hit comedy returns to London following its critically acclaimed Edinburgh Festival Fringe run. ‘Stunning… High Energy… Hilarious’ (Meg.ie). ‘Genuinely Hilarious’ (Irish Times). ***** (Remote Goat). ****½ (reviews.Hub.com). Nominated for the Best Musical, Best Music, Best Song, Best Performance, and Best Supporting Performance at the Edinburgh Fringe Dark Chat Awards.