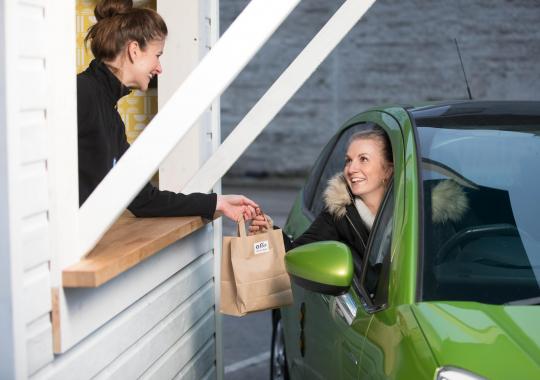 All meals served are free

The Drive Thru opening follows research to celebrate the launch of Weight Watchers Flex, the most liveable and flexible weight loss programme. It found that January is the month that Brits spend the most time thinking about food.

Brits’ thoughts turn to food 12 times more in January than they do at any other time of year, with feeling guilty about over indulging during the festive period (41 per cent) and pressure to lose weight (30 per cent) cited as the main reasons for having food on the brain.

Chocolate topped the list of foods Brits crave most frequently (34 per cent) with this number rising to 50 per cent for 25-34 year olds, closely followed by chicken (23 per cent), cheese (22 per cent) and bread (18 per cent). Surprisingly, it isn’t just comfort food and indulgent treats that made the top ten; fruit (18 per cent) and vegetables (16 per cent) also appear to play on Brits minds, suggesting they are embracing healthier food choices after an indulgent festive season.

Commenting on the launch of the Drive Thru, Zoe Griffiths, Head of Programme and Public Health at Weight Watchers said:

“For people to successfully lose weight and live healthier; simplicity and flexibility are key. The research findings indicate that people are feeling restricted on what they can eat, and this is causing them to think about food more and crave unhealthier options. We want to remove the thinking that being healthy is difficult or restrictive and show Brits how they can free their minds from constantly agonising over food choices.

“The Drive Thru showcases just some of the foods that you can eat on the Weight Watchers Flex programme, where no food is off limits, offering a wide range of zero Points foods that guide members toward a healthier pattern of eating. It gives people the freedom and flexibility they need to make significant lifestyle changes that have positive benefits beyond just weight loss.”

The Drive Thru will be serving free breakfast, lunch and dinner made from some of the 200 plus zero points foods available on the new Weight Watchers Flex programme, near London’s Borough Market on Tuesday 9th January. Available for one day, the pop-up aims to help people through January and demonstrate the vast variety of food you can eat on Weight Watchers – while still enabling you to lose weight and be healthy.

The survey also indicated that Brits see a number of foods as ‘off limits’ in January, with nearly a third of respondents feeling they shouldn’t eat a takeaway (28 per cent), chocolate (26 per cent) or pizza (19 per cent). Chinese was considered to be the most ‘off limits’ cuisine (18 per cent), with a quarter of 25-34 year olds also feeling that ordering an Indian was a no-go.

Guilt is strongly associated with eating certain foods, particularly for women who are 45 per cent more likely to feel guilty about eating chocolate and fast foods in January. Those surveyed are almost twice as likely to feel guilty about eating unhealthy foods this month versus the rest of the year (49 per cent) and nearly one in five (18 per cent) of 25-34 year olds admit to going as far as cancelling a night out in order to maintain a healthy eating regime.