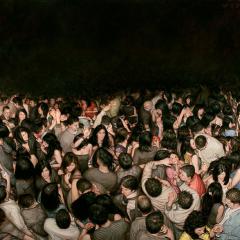 Recently featured in collaboration with French fashion giant, Dior, these hyperrealistic masterpieces seize moments of passionate intensity within their depicted crowds. Having been in a band in his early twenties, Witz became fascinated with the gradual build of tension within an audience that would eventually lead to these climactic moments of “beautiful chaos”. Working from photographs he takes at live events, Witz employs artistic techniques that date back to the old masters, in order to render scenes of the most magnificent clarity and depth.

Witz reveals that despite the obvious aggression of the punk rock pit, there is also an underlying sense of euphoria and unification shared amidst the crowd. “I’m an academic realist painter, but I’m living in the 21st century, so I’m not going to be painting Roman soldiers invading, or some gothic baroque composition…The highest aspiration of an academic realist painter are these big group figure paintings, and I’m using the hardcore scene as my subject.” - Dan Witz, 2016