East Of The Garden 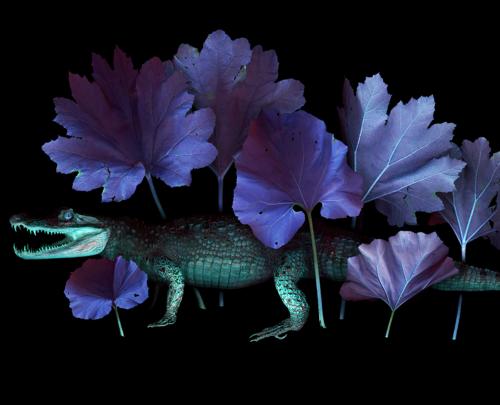 It is with great pleasure that StolenSpace presents, ‘East of the Garden’, showcasing the latest in a series of spellbinding new works by British artist, Meryl Donoghue. Hypnotic in their grace, yet unnerving in their subject matter, these large-scale photographic pieces, sketches, and collections of polaroids explore the psychological power of strangeness in an unfamiliar landscape.

From neon coloured alligators to deer-headed damsels, Donoghue’s surreal creations combine elegance with mutation and sexuality with abnormality. Set in blank spaces, devoid of context, these sublime anomalies find power in their ability to unsettle. To the artist, “pure beauty is far less interesting than a beauty that has been infected and spoiled, because it is this contrast that provokes conflict within the experience of the viewer”. Seducing her audience with the complexity of her pallet and luxurious use of light, Donoghue is simultaneously exposing them to something bizarre and unpredictable, placing them in a state of mesmerized uncertainty.

The inspiration that drives Donoghue’s creative output is extraordinarily diverse. Over the last few months the artist has taken several trips into Israel and Rub’ Al Khali, the Empty Quarter in the UAE, with the intention of exploring the deserts in these regions, a terrain never previously experience by the artist. Recording these trips through the making of super 8 films, polaroid photographs, digital sound recordings, drawings and notes as well as collecting from the landscape, most notably the bones that she found there, Donoghue has unearthed a complexity of narrative and discovery that is carefully woven through the subsequent body of art works made.

She states that her pieces “often exist as metaphors for punishment; punishment for hidden feelings and secret deeds”. Shrouded behind layers of folklore and fairytale, her art conceals what Donoghue has come to perceive as “the universal fears of life: death, isolation, wasted time and missed opportunity”. Through the majesty of her art these anxieties take shape, manifesting into forms that are not only beautiful, but that are capable of being navigated and understood. Donoghue invites the audience to step into her bizarre and fantastical world in the hope that they too may come to terms with anxieties of their own.