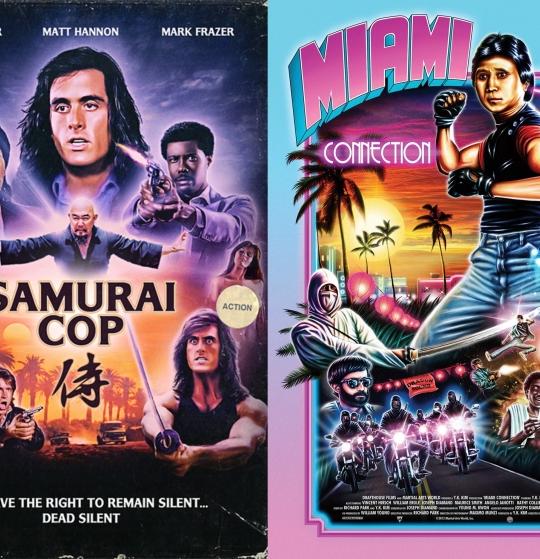 As we proudly state in the FAQ section of the Crap Film Club website, some bad films deserve to be shown more than once. "Samurai Cop" and "Miami Connection" might be the two best worst examples. Quite simply, both belong in any serious bad movie lover's top five flicks and, having not shown either film for at least 4 years, we think it's high time to bring them back to the biggish screen!

To properly accommodate this momentous occasion and give these films the treatment they truly deserve, we'll be pitching up on a Sunday afternoon at Hoxton Square Bar & Kitchen (just a stone's throw away from our normal home, The Book Club), a venue which not only serves fantastic food and drink but can also seat the sheer hordes of crap film fans who will want to see this perfectly paired double bill.

And that's not all! We'll also have Rob Hill, author of "The Bad Movie Bible", co-presenting and selling discounted copies of his excellent book AND a specially filmed video intro from "Samurai Cop" star Matthew Karedas. What? You want our celebrated crap snacks and competition as well? Oh, go on then! So, come soothe your hangover with a hair of the dog and more laughs than you ever thought possible...we'll "keep it warm" until Feb 25th and see you then!

SAMURAI COP: where the Far East meets West with unintended hilarious consequences. This is what happens when a former bodyguard of Sylvester Stallone is cast in an Iranian-directed American martial arts film, despite lacking any previous acting experience or, indeed, martial arts training.

The plot is simple: a Japanese gang is up to no good in Los Angeles and it's down to Joe Marshall, a long-haired, lone-wolf from San Diego, trained by the "masters in Japan" in the Samurai ways (but who never actually speaks Japanese), to stop them. Unsurprisingly, the story goes nowhere...what we do get to pass the time are multiple, unnecessary, and overly long sex scenes, low-speed chases, stilted fight scenes artificially sped-up, multiple scenes of scheming and veiled threats, the angriest police captain in screen history, a token partner who seems to be the only one who realizes he's in an awful movie, and a climactic sword fight between two people who don't know how to fight with swords. Obviously trying for a 'Lethal Weapon with martial arts' sort of vibe, this movie fails on pretty much every level...we LOVE it!

"An awesome, one-of-a-kind movie that seems like it was made on another planet, Samurai Cop stands alone in its charming, winning, violence-and-nudity-packed ineptitude." - Comeuppance Reviews

MIAMI CONNECTION: The year is 1987. Motorcycle ninjas tighten their grip on Florida's narcotics trade, viciously annihilating anyone who dares move in on their turf. Multi-national martial arts rock band Dragon Sound have had enough, and embark on a roundhouse wreck-wave of crime-crushing justice.

When not chasing beach bunnies or performing their hit song "Against the Ninja," Mark (tae kwon do master/inspirational speaker Y.K. Kim) and the boys are kicking and chopping at the drug world's smelliest underbelly. It'll take every ounce of their blood and courage, but Dragon Sound can't stop until they've completely destroyed the dealers, the drunk bikers, the kill-crazy ninjas, the middle-aged thugs, the "stupid cocaine"... and the entire MIAMI CONNECTION!!!

What kind of rock band only plays songs about tae kwon do and ninjas? What kind of rock band live together in a house where they sit around all day bickering and not wearing shirts? What kind of ninjas ride Harleys and steal cocaine from gangsters? These are just some of the questions raised by this '80s martial arts travesty, straight from the brain of business student Y.K. Kim - a man who, by his own admission, had only previously watched six films...ever. Rejected by hundreds of studios and distributors and crowned as the worst film of 1988, it languished