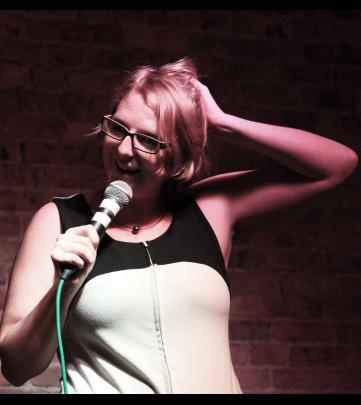 Everyone makes bad decisions, right? But let's be honest, those lead to the best stories.

Comedian Robyn Perkins (English Comedian of the Year Finalist) uses a series of hilarious anecdotes, family drama and even some neuroscience to make a well thought out decision for a random audience member. Its a fun and upbeat journey, leading to a decision which could change someone's life. Don't miss this show about why we make the decisions we do, and whether we can decide to be happy.

ON ROBYN PERKINS
American comedienne Robyn Perkins has been bringing her ‘engaging persona’ (Steve Bennett, Chortle) to comedy clubs around the UK and US since 2011. Her background in biology influences her ‘unfiltered’ comedy, combining science and real life stories.

She MCs frequently, including a weekly professional standup night in Battersea and Honor Oak- Laugh Train Home – and is a witty and chatty act.

In 2015, Robyn was a part of AAA at The Pleasance in Edinburgh, having been a finalist in several prestigious comedy competitions, including English Comedian of the Year in 2014.