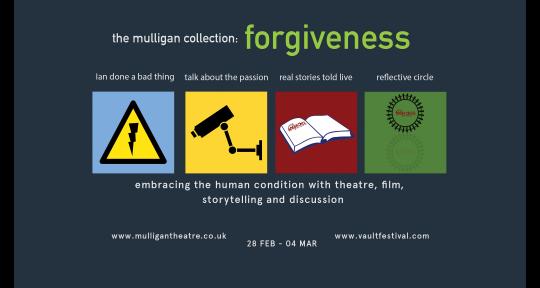 The Mulligan Collection: forgiveness is the inaugural body of work from new company Mulligan Theatre. Theatre, Film, Storytelling, Discussion and Academia all rolled into one collection exploring forgiveness.

For us, forgiveness comes down to the rules you live by, and how staunchly you believe them. They might come from a monolithic doctrine, parentage and family, or just hard knocks and past experience. They are unique to you and everyone plays by a different set of rules, so with an uneven playing field what have we got to do to ask you to forgive?

We just want to start the conversation. And sure, we love the theatre, we tell stories, so why not have some fun at the same time?

We’ve created two bespoke pieces of theatre which look at forgiveness in different ways. A death row inmate talking to his muse moments before his execution and a battle of self-preservation between a grieving father and a publisher who stands to profit from his loss. We believe that the audience should have an active role in the theatre – they are after all who we make theatre for – and in this season each piece will give the audience an active decision on how the play ‘should’ end.

We’ve also teamed up with award winning international charity THE FORGIVENESS PROJECT to create responsive work to the components of Forgiveness with live storytelling, film and discussion. The Forgiveness Project uses the real stories of victims and perpetrators to explore concepts of forgiveness, and to encourage people to consider alternatives to resentment, retaliation and revenge.

IAN DONE A BAD THING – A play by James Barbour and Sam Carrack
Ian Newman is on death row, he did it, he is guilty. 12 years after the crime he is still sure he did the right thing. What do you think?

TALK ABOUT THE PASSION – A play by Graham Farrow
A grieving father is hell-bent on revenge of the paedophile who killed his child, but more immediately the publisher who published the criminal’s memoirs.

THE FORGIVENESS PROJECT:
REAL STORIES TOLD LIVE – Film, Live Stories and Discussion based on the work of The Forgiveness Project

REFLECTIVE CIRCLE – An interactive experience by The Forgiveness Project