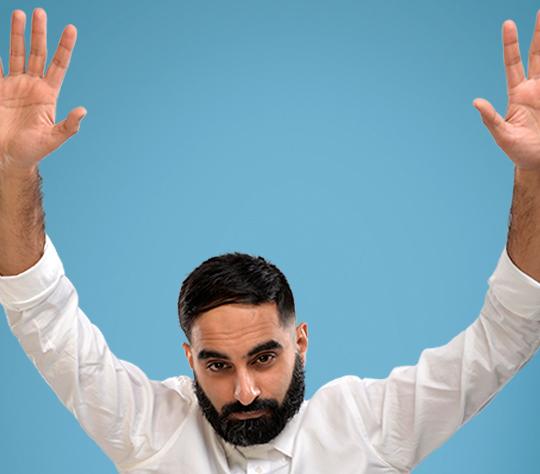 Armed with his trademark cheek and uncompromising approach, the star of BBC Radio 4’s Tez Talks and BBC2’s Live at the BBC, TEZ ILYAS, presents his slick, smart and typically subversive new stand-up show on a nationwide tour.

As also seen on BBC2’s Mock The Week, Channel 4’s The Last Leg, BBC3’s Man Like Mobeen and regularly heard on BBC Radio 4’s The Now Show. Following a successful solo tour of his previous show last year, and a support slot on Josie Long’s nationwide tour, Tez is back heading across the UK.

‘A mischievous show with serious intent – Ilyas has the slickness of U.S. comics, and the gags to back it up’
The Guardian

‘Tez Ilyas’ political stand-up is candy floss with a razorblade inside: sweet and familiar at first, then shockingly, painfully sharp. It takes serious talent to pull off’
The Telegraph

‘Thoughtful but radiantly entertaining’
The Times