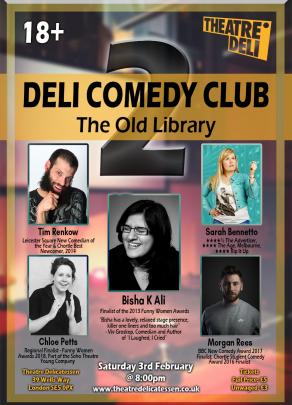 Following its successful launch in December 2017, the DELI COMEDY CLUB is back!

Join us for a side-splitting evening of stand-up comedy, featuring both upcoming and established, award-winning comedians from both the UK and overseas.

Set in a new, vibrant London venue, the Old Library showcases a pick 'n' mix of the new voices of comedy.

"My boyfriend and I were thoroughly entertained last night. Had a real giggle, MC Sam was fab. Great night, looking forward to the next one."

"Very strong bill in quirky surroundings. Samantha Baines is a classy compere and all four comedians had strong and original material."

"A varied and interesting international selection of comedians and compere, each drawing on their individual cultural backgrounds for material."

Join us for a celebration of comedy and cheap booze at what promises to be a brilliant night of laughter!

Ticketholders must be over 18, ID may be required at box office.