StraightUp Comedy at the Landor Space #5 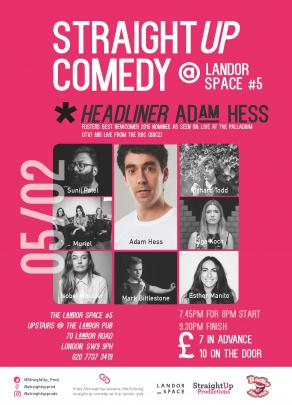 £7 in advance (tickets.straightupproductions.com/)
£10 on the door

20% DISCOUNT online when you buy four tickets and use code: HESS

Having previously hosted Suzi Ruffell, Ken Cheng, Heidi Regan and Rob Oldham… StraightUp Productions presents the fifth edition of our regular night of comedy above The Landor Pub, a stone's throw from Clapham North and Stockwell tube stations. A remarkable night of comedy is promised with a line-up of fantastic talents, brought to you in the superb, recently renovated Landor Space!

ADAM HESS:
“I've seen few shows that are funnier” - The Times
“For high quality gags per minute there's no better comedian on the fringe” - The Independent
Chortle
Time Out

StraightUp bring together eight unique and wonderful acts. With exponents of the surreal, storytellers, one-liners and sketch comedy StraightUp Comedy #5 is a continuation of our promise to provide our audiences with unforgettable nights of varied, fresh and high-quality comedy in a fantastic setting with a diverse line-up. See you there!