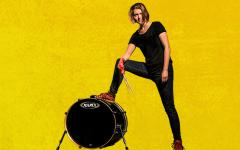 A Mother clings to power whilst her Daughter screams murder. An estranged Son is coming home. A bloody family saga sprawling decades is about to reach its conclusion. Everything is about to change. DumbWise reinvent the murderous Greek myth of power and prophecy as a lyrical modern epic with a live punk-rock score.

Electra, played by Lydia Larson (Skin A Cat, Bunker Theatre & Vault Festival; Doctors, BBC; Kidnapped, Virgin), is set against a backdrop of a revolution, drawing inspiration from modern, international conflicts and uprisings. The revolution is sparked by issues familiar to a modern audience – austerity, unemployment and political corruption. This new adaptation blends the contemporary and ancient, creating a recognisable world that is also one step removed.

Inspired by the desire to reinvent Greek dramaturgy, the show puts all the action onstage, championing dynamic dialogue over long exposition, using many locations in an almost cinematic retelling and adding a revolutionary context to surround and influence the domestic narrative.