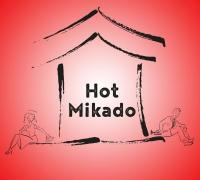 Set in 1940s Japan, but with a twist, Hot Mikado is a classic tale of forbidden love.

The Emperor of Japan’s son, Nanki Poo, who is masquerading as a poor musician, falls head over heels in love with the beautiful Yum Yum, but she is engaged to the Lord High Executioner – someone not to be messed with!

Favourites such as ‘Three Little Maids’ and ‘A Wand’ring Minstrel I’ are transformed into fantastic show-stopping numbers.

Following on from their fantastic production of Sweeney Todd in 2016, Havering Music Makers presents this high-energy musical comedy, with an eclectic mix of blues, jazz, swing and gospel – and a big dose of flirting thrown in for good measure – which will have you tapping your toes from start to finish.

Based on ''The Mikado'' by W.S Gilbert and Arthur Sullivan.