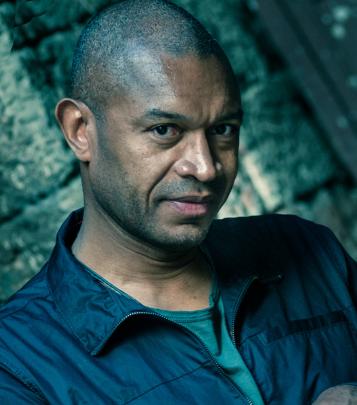 The Award-winning London-based African American jazz, soul and blues singer Bruce Lester “Mississippi” Johnson was born in Starkville, Mississippi and grew up in Indianapolis, Indiana. Heavily influenced by his father's love of classic Soul and R&B, music and singing were always a part of Bruce's life. However, he started his career with a 7-year period in the US Marine Corps before ending his enlistment whilst stationed in Paris. Finding himself in a city full of music and nightlife he made the decision to make singing his full time profession and has, as they say, never looked back. He began to showcase his talent in various venues around Paris and it wasn't long before this charismatic, six foot four inch, singer with the effortlessly soulful bass baritone voice was being noticed for his unique sound and style, and his popularity soon began to grow. With his reputation on the rise he branched out and formed his own funk band that was to go on and win the Jack Daniel’s music competition in Bordeaux, judged by the late, great Nina Simone. This gave him the opportunity to record his first single and went a good way to cementing his reputation in Paris. His next move came when he joined the band of legendary blues bassist Big Joe Turner (BB King, Albert King), which gave Bruce a chance to tour the world and at the same time hone his Blues vocal skills. Collaborating with the pianist from that band Bruce produced the CD "That's The Deal Baby" which is a contemporary take on old school blues and soul, recently re-released in the UK. Returning to Paris, Bruce continued to work in prestigious venues with established French musicians, before eventually ending up on the French version of "The Voice". It was this appearance that led to his being asked to join one of France's leading "Rat Pack" ensembles, Forever Gentlemen, with whom he has appeared on two CD's, the first, released in October 2013, going triple platinum and the second CD “Forever Gentlemen 2” being released in October 2014 to considerable acclaim. These days a vastly experienced performer with an eclectic style Bruce includes work at numerous prestigious festivals and venues such at the Montreux Jazz Festival and the Royal Albert Hall on a wide and impressive CV. And if all that wasn't enough Bruce is also a well-established actor with over 20 film and TV roles to his name. A recent recipient of the 2017 Living Blues Critic's Award, "Artist Deserving More Attention" Bruce will tonight be showing more of his jazz/blues side, accompanied by an A-list band of some of the UK's finest musicians, including Mike Gorman-piano (busy day for Mike!), Ed Jones-sax, Neville Malcolm-bass and Chris Draper-drums. Bruce promises a "Jazz/Blues Extravaganza", which coming from a man who has gone triple platinum singing jazz standards makes sense! Promises to be quite a gig.

"His voice puts me in mind of ...great vocalists such as Lou Rawls" Blues Matters; “…worth picking up just for Bruce’s soulful voice alone. Add the nostalgic feel of the ’70s funky soul...and you have something different, a ”blues” that everyone should appreciate.” Blues Rock Review; “beautifully soulful...impressive” Underground Press; "There's something you can't quite place your finger on when it comes to this vocalist. He's like an exotic butterfly you've captured and don't know where it comes from or what it will become tomorrow" Athens News