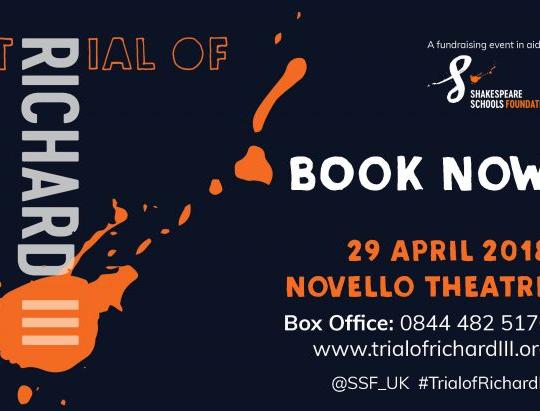 This unique fundraising event will see top criminal barristers, a killer cast of celebrity performers and young people from our nationwide Festival unite on stage to perform a one night only theatrical production.

SSF is thrilled to work with BAFTA award-winning playwright Jonathan Myerson and Northern Stage Associate Director, Elayce Ismail on this unique fundraising production which will raise the vital funds needed to ensure our work continues.

This is the fourth Trial of… fundraising event produced by SSF having most recently seen Macbeth (Christopher Eccleston) acquitted for murder in 2015 at the Noel Coward and Hamlet (John Heffernan) acquitted at the Wyndhams in 2016 for the murder of Polonius. Join us to either acquit or convict King Richard III.