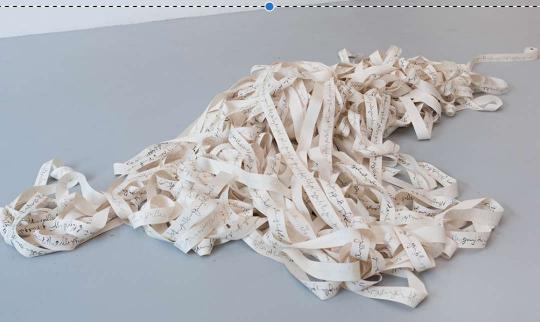 “ [..] That there is a link between time and temperature
is an ancient and recurrent idea. If you think about it,
all phenomena where we detect the passage of time are
co-involved with temperature [..] It is always heat and
only heat that distinguishes the past from the future.
We live and get old: producing heat”

Thermal Time presents a series of works that explore the notion of time from the very presence of the human body. Artists Charbel-joseph H. Boutros, Nicolas Bacal, Marcus Coates, William Mackrell and Jaime Pitarch are brought together in this exhibition to dig into the concept of time through sculpture, video, installation and performance. Throughout the show, there is a sense of trying to grasp life, repeatedly referring to the movement of the body as a register of the passing of time. The works unavoidably reflect on the hard intent of grasping time through their physical fragility, ephemeral condition or embodied struggle.

In Jaime Pitarch’s Work in Progress, two circular shapes made with Judo belts hang on the wall next to the other. The circle on the left shows a spiral of belts starting with the white belt in its centre, and progressively followed by the remaining colours used in the conventional sport ranking system. Acting as a metaphor for the process of growing up and specifically questioning the alleged improvement of the self over time, the inverted process is then depicted on the right, offering this one as an equally valuable learning option. Through the title, the artist depicts life as a continuum, the belts quietly alluding to the human body that they used to surround. Another work titled Qui Custodiet Ipsos Custodes (Emerald), Pitarch almost inverts this, surrounding a paint can entirely in layers of what was originally it’s total content. Time is marked heavily by the arduous task taken to complete the work, questioning the arguable futility of various kinds of human labour.

A repetitive action is also recorded in William Mackrell’s piece Going to the gallery. By the entrance to the gallery, an entangled pile of rolled paper is covered end to end with a repeated hand-written mantra. The cluster of paper seems to acknowledge a performance just missed: the artist’s walk from his studio to the gallery dragging a roll of paper in which he repeatedly wrote the words ‘going to the gallery’. Here performance is not just a one time event, a video or a photograph, but a physical and tangible manifestation of time.

Another performance memorialised in the exhibition is Charbel-joseph H. Boutros’ s piece Inside Sculpture. An aspirin lies on a marble shelf in front of an A4 paper with the written sentence: “Yesterday I took an aspirin. Not for healing any kind of sickness, but, merely, for a sculptural manoeuvre. To thin my blood for a period of four hours.”

In Marcus Coates’ video Self-portrait as Time, a minimal action is taken to meticulous lengths as the artist’s finger insistently follows the second hand on his wristwatch. Here the performance lasted for a total of 12h, the video now acting as an accurate clock and creating the illusion that his body is directing the passing of time. After many hours of focus he said that “at times the distinction between me and the watch disappeared and I fully believed I was moving the second hand and had the measure of time”.

Nicolás Bacal’s Untitled is a fragile sculpture. The work is composed of a blue helium balloon tied to the hand of a common office clock, firmly impeding its ticking. While there is a mocking sense of the fantasy of stopping time, the work also requires a human presence, it’s maintenance dependent on daily inflation of the balloon by gallery staff.